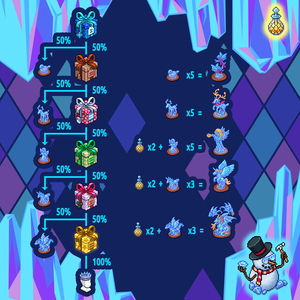 The Ice Throne was released on December 19. There were 168 units available for 750 Credits. The rare was not as popular as other recent Limited Edition Rares and did not sell out.

Welcome to the Winter Palace

There were eleven games available to play, for winning each one Habbos would receive a badge and Vial of Gold Dusts to use in the Winter Palace Crafting.

The high temperatures are putting the Winter Palace and everything inside of it in danger of melting. Protect the palace by closing the entrance doors which have been left open before the heat reaches the Magic Hallowed Ice Fountain and Christmas gets ruined.

The Queen had everything prepared for the annual Christmas party. Unfortunately this year the party might not even happen because of all the ice that's melting inside the palace. Help the Queen save the food and presents before they get ruined too.

Everyone in the palace knows that the magic Hallowed Ice Fountain is hidden in one of the many rooms of the palace. In order to find it you'll need to make your ways upstairs stepping only on the pressure plates.

The Boreal Mage is one of the lucky few who actually knows where the Hallowed Ice Fountain is kept, or at least that's what everyone in the palace seem to think...
Find the hidden switches that will make music boxes appear and check for yourself whether the rumors are true.
Good luck getting any help from the Boreal Mage, she's not the most trusting person you'll meet...

To reach the teleports on the other side of the ropes you'll first need to catch all the snow sprites.

Father Frost was on his way to meet the Boreal Mage when he got lost and entered the wrong room. Now he's stuck and can't get move past the candy canes that are blocking his way. Help him make it to other side of the room.

If the clue the Boreal Mage gave you is true there might be a secret password hidden in some books. Find the right books and make sure to remember the password maybe you'll need it in the future.

You're one room away from reaching the Hallowed Ice Fountain, but before you get there you need to collect all the figurines that are erratically moving across the floor.

The Queen was about to rescue the fountain when suddenly a bunch ice blocks fell in front of her blocking her way to the fountain. Help her remove the ice blocks and save the Hallowed Ice Fountain before it's too late.

The Queen is running out of time, most of the rooms of the palace have melted except for this one. This is the Queen's last chance to secure the fountain and save her palace.

Egbret the Excitable Dragon was a game created by Builders at Work. The game was made up of five mini games and in every room was a badge.

Habbo gave some users the first oppurtunity to wear the new Clothing items via a giveaway on Twitter. The winners also received a badge.