Alpine Heights is a furniture range and campaign that ran throughout April 2020 to celebrate Easter [1]. It follows the theme of backpacking and camping.

On the first day of the month Habbo announced an update where, due to a dependency issue between the Flash Client and the new Unity Habbo 2020 Client, some avatars would not appear in Public Rooms and instead would appear as a Red Pod. This was, of course, an April Fools joke.

The month was also unique because of the COVID-19 pandemic; which inspired some games and events, including the Balcony Bash live event that was hosted by the Official Fansites. A great number of older users, who did not use Habbo as much as they once did, returned for a reunion party on April 18.

Other events that happened during the month include the [WAH] Welcome to the Alpine Heights! games and the 2020 Habelections.

Along with this campaign came a new range of furniture.

New clothing items were also released for this campaign.

Two crackable rocks were available for 5 Credits and 5 Diamonds each. There were two different versions with different items inside, the darker Siren Rock and lighter Mermaid Rock. To crack the rock Habbos would need to equip the hammer effect and then they would receive one of four items. They would then need to equip the magic wand effect to 'clean' the item. For both rocks there were three common items and one rarer gold clothing item. The percentage for receiving a common item were 31.25% for each item and for the gold item it was 6.25%.

Four new rares were released throughout the month, two of which were wearable items.

A new Limited Edition rare, the Fortune Duck, was released on 27 April. There were 504 units available for 250 Credits each, and they all sold out within 81 seconds.

The following room bundles were newly released during this campaign.

The following bundles were re-released during this campaign.

The Habelections were announced on April 3rd with an outline of the structure and timeline of the campaign and information on how Habbos could nominate themselves[2]. The President's role would be to be the President of Fun and create competitions for the month of May 2020.

Over the next days Habbo released articles about the candidates[4][5][6][7][8]. On April 18th, the polls were opened and Habbos could go to the Hall of Habbo to vote for their top 6. The final 6 candidates participated in a live debate on April 22nd and on April 23rd the polls opened again to vote the top 3.

The final 6 candidates (and the percentage of the top 6 votes they received) were[9]:

This was followed by another live debate, with the final poll taking place on April 28th. Pulx was announced as president on April 29th after receiving 44.4 of the vote. Kalesalad received 36.9% and Clatter 18.7%. Pulx's presidency position ran from 29th April to May 31st 2020[10].

Alongside the Habelection competition there was a competition to design the debate hall for the two live debates that would occur during the campaign[11]. The top three halls received a Great Farm Bake Bundle and 10 runners-up received 14 days of Builders Club. Everyone who entered received a badge and a Citrine Seal.

The winner whose room was chosen was Oivind[12].

[WAH] Welcome to the Alpine Heights!

The Welcome to the Alpine Heights were a series of games for Habbos to receive badges and a Rainbow Egg clothing accessory.

The Secret of the Alps 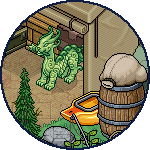 Walking by the river you have found two artifacts that look suspiciously similar to the relics you are looking for... Could this be a lucky strike or a sign that the Alp gods are on your side? Time to find out!

Looking for the Mystic Tree You found a secret track, that's suppose to take you yo the Mysitc Tree. The only way to find out is to make it to the other side before the timer ends.

Defend 'til the End! Rumours fly and everyone in town is now aware that you have one of the relics with you. You're now on a mission of trying to escape from the people that are chasing you, while you find a safe place to hide.

Sneaky Business It's clear to see that you are not the only one who is looking for the ancient relics. Unfortunately a group of backpackers have found the Jade Guardian before you had a chance to... It may not be the nicest thing to do but you'll have to sneak into their campsite and steal the relic from them in order to complete your quest.

Keep Calm and Carry on Kayaking You are close to completing your quest, you've overcomed every obstacle in your way and you know for a fact that a small river and a few goats won't stop you.

When in doubt, help out. It's been days since you found the last relic, and you are starting to wonder if you should just give up... What if the fifth relic dissapared a long time ago and you're just wasting your time?

You're about to go back to your campsite when you see a hurt hike laying on the ground. You decide to give him a hand before you go back.

The Ultimate Pixel Race was a tournament involving four races[13]. From April 30 to May 3 one race a day would open at a certain time. The first 10 Habbos to complete the race would receive their name on a leaderboard, and after all four races the 10 Habbos with the most points would win a trophy. There was also a badge for completing each race.

On April 8th the Official Fansites hosted a live event where Habbos partied and chatted from balconies, inspired by similar gatherings happening in the real world at the time[14]. Each fansite, including HFFM, HabboBites, Habbox, HabboRPG and HabboQuests, hosted for one hour with live music over their radios. Every user who went to one of the parties received a badge.