Each year Habbo release more seasonally themed items during the Christmas period, which gives players something to collect or accomplish throughout the entire month of December.

In previous years the collection of items such as Penguins and Snowflakes took place. Each year previous furniture lines are re-released, along with a new seasonal campaign and a festive Advent Calendar, from which players can receive exclusive items.

Although the exact original release date is unknown, the original range of Christmas furniture has been around the hotel for many years and returns to the catalogue every December. This line includes basic Christmas themed items such as candles, tinsel and a selection of Christmas trees.

Along with this classic furniture range, each year Habbo releases a new line or new features to assist with the seasonal festivities.

The 2007 Christmas campaign saw the introduction of seasonal events. Further furniture items such as Snowy maze furniture, Snowy Castle furniture and Santa's sleigh were also introduced in 2007. Once again, these items are typically re-released in the catalogue every year.

Christmas 2007 also included the first Christmas rare, this being the Stuffed Reindeer.

December 2008 saw the introduction of the Arctic furniture range. This range consisted of largely ice-themed furniture, notably including items such as the Hot Tub, Snow Storm and Icy Teleporters.

This year's Christmas campaign also allowed players to complete exclusive achievements while playing the classic games Snow Storm and Battle Ball; both of which were removed from the hotel in 2014.

For each day that players logged in from the beginning of December up until Christmas, they received one free furniture item from the Advent Calendar. The 2008 Christmas campaign gifted players various Penguins; these were untradeable and so could only be obtained by accessing the hotel and redeeming the gift from their advent calendar. The Penguins promotion required you to log in each day to redeem a different Penguin and once you had done so you were still in the running to receive the special gift at the end; a Penguin Gift, they appeared icy and stood tall like an Emperor Penguin and are still available to buy and sell in the hotel today. They are also a hot buy near Christmas time due to the appearance of it.

In 2009, Habbo released a new furniture line which included items such as Candy Canes, Snowmen and a Holiday table. As well as this, 2009 also saw the introduction of Baubles to the catalogue. Similar to a lot of other Christmas furniture, these are available for purchase every year.

The Christmas campaign released in 2010 included a new range of city-themed furniture. Some of these items, such as the Chestnut Roaster, were given out to players for free along with seasonal promotions.

2010 also saw the introduction of Snowflakes, a seasonal currency that was given to players as a reward for completing a series of quests throughout the Christmas period. The Snowflakes could be used to purchase exclusive furniture items, often referred to as Snowflake Gifts. These items were untradeable, meaning that the only possible way to obtain them was to complete the set quests.

The Christmas Cabin range saw the appearance of more indoor Christmas-themed items, and there appeared to be a larger range of items available than there had been in previous seasonal campaigns.

In the Christmas period of 2012, the Xmas Castles line was released. This was also the first year that a Christmas-themed Limited Edition Rare were released, these being the Santa Throne and Santa's Workbench. There were 200 units released of each rare and both sold out.

The campaign released for Christmas 2013 was named Santa's Workshop, aptly named as it all followed a theme of workshop-related items including Santa's Workdesk, toys and tool items. A new range of Snowflake furniture was also released.

Along with the Christmas furniture line, a series of rare furniture items, credit furniture and one item of Super Rare furniture - the Robot Dinosaur - were released.

In 2014 the Tropical Xmas line was released, this Christmas campaign was noticeably different from previous campaigns as it avoided any snow or icy furniture, which was a common theme in previous releases.

Along with this line of furniture, an exclusive range of Seashell elves were released, which could be purchased with the seasonal currency of Seashells. 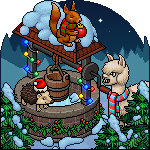 Four new rares were released throughout the month, these being the Clock Tower, the Ornate Winter Sleigh, the Bavarian Christmas Photo Stand and Rudolf the Red-Nosed Reindeer.

As well as this, four Limited Edition Rares were released during this years' Christmas season, these being the Bavarian Nutcracker, the Christmas Wishing Well, the Glowing Reindeer and the Frozen Fountain. 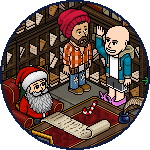 The Christmas Citadel range was released during December 2016, which included a variety of castle-themed items.

Four room bundles were released throughout the month, each with an exclusive piece of furniture. As well as this, four new rares were made available for purchase, along with the Limited Edition Rare Benji. 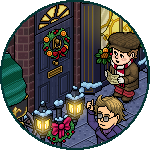 In December 2017, the Victorian Christmas campaign was launched. A new furniture range was released following the theme of Christmas in the Victorian era, including shops, architecture and animals.

During this campaign a new Crafting range became available, where players could use the Tailor's Sewing Machine to craft Victorian-themed clothing items.

A range of six collectible dolls were released throughout the month, with players gaining an exclusive badge for collecting all six.

Three rares were released throughout the month, these being the Victorian Horse Carriage, Victorian Music Box and the Victorian Lion Statue. As well as the Limited Edition Rare Ted. 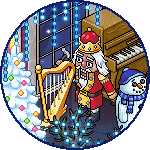 The Winter City Festival campaign was launched during the 2018 festive period. As usual, a new line of furniture was released along with four new rares and one Limited Edition Rare, the Frosted Habberge Egg.

Four room bundles were released during this campaign, two of which were new at the time of release; the other two being re-releases.

Once again, the Habbo advent calendar returned. This year players received either Credits, Duckets, Habbo Club, Builders Club or one of the exclusive furniture items that was only available through the advent calendar. These were nine uniquely dressed reindeer, all of which had the same name as Santa's traditional reindeer.

The Big Habbo Christmas Game took place in December of 2018, where a new Christmas-themed game was released for players each day leading up to Christmas. Players who completed the game would receive either a Santa Matroyoshka Doll or a Christmas Tortoise. 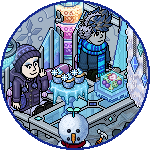 Christmas of 2019 saw the launch of the Winter Palace campaign, which was seemingly inspired by the animated movie "Frozen". During this campaign, new furniture items were released that were all and icy blue in appearance, along with five new clothing items.

The Habbo Christmas advent calendar made a reappearance in the days leading up to Christmas, with the exclusive furniture items including various animals and people.

Once again, a campaign exclusive crafting system was launched, with the exclusive Snowman Crafting Table. Crafting ingredients could be obtained through one of six crackable boxes.

Four new rares were released throughout the month - these included two clothing items and two furniture items. The Ice Throne was released during this campaign as a Limited Edition rare. 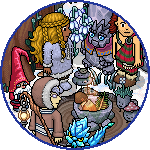 Christmas 2020 saw the release of the Enchanted Winter Forest campaign. The range of furniture released during this campaign included many nature-themed items, such as trees and plants. As well as this, four new clothing items were released. This was the final campaign that ran on the Flash client before its discontinuation at the end of December 2020, and the launch of Habbo 2020.

Once again, an exclusive crafting table - the Rock Crafter - was released during this campaign. Using this, there were eight different creatures that could be crafted.

Throughout the month, four new rares were released; two of these were clothing items while the other two were interactive furniture items. One Limited Edition rare, the Himalayan Yak was released during this campaign.

A total of eight room bundles were released in December 2020. While six of these were re-releases of older bundles; two were new bundles that made use of the new furniture items. 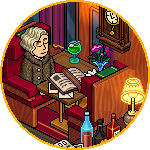 The Christmas season of 2021 brought on the release of Habbo's Habbo Express campaign. This campaign saw the release of a Polar Express-based furniture line, along with craftable miniature furniture and clothing items.

Throughout the campaign, four new rare were released; as was a Limited Edition Rare in the form of the Art Deco Habberge Egg LTD.