This page is about the Habbo Stars furniture line and event. If you are looking for the currency, click here

Habbo Stars is a furniture range that was released onto the hotel in conjunction with the international Habbo Stars talent campaign, run for two weeks in November 2012.

As well as the furniture line, which is still available in Builders Club today, new Official Rooms, Effects and 13 Badges were added. For the first time, you could also buy the upgraded user-owned Bots from the catalogue.

Some items were only released in the original campaign, and have not been added subsequently to the Builders Club catalogue.

The Backstage Passes that users received daily could be exchanged at a new version of the Ecotron, the Prize Matic.

For the first time, you could now purchase bots from the catalogue: a Casual Bot (previously Robbie) and a Waiter/Serving Bot.

During the Habbo Stars campaign, Diamonds returned as a special currency, and could be exchanged for Credits, or spent on the new Diamond Rares. The podium was 25 credits and 12 diamonds while the Uplink station was 50 credits and 25 diamonds.

Each item also gave the user a badge when purchased.

More SFX was also added to the catalogue during the Habbo Stars Campaign. 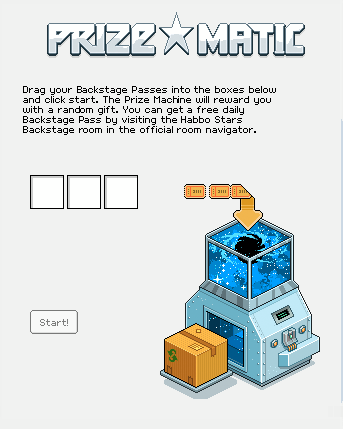 Based on the Ecotron, the Prize Matic was a new section of the catalogue released for the Habbo Stars event. Users could gain a backstage pass just by entering the official Backstage Room created for the event.

Users could then exchange three Backstage Passes in the machine for either a:

Habbo Stars was primarily a talent competition for players across any hotel internationally. It was split into four categories: Dance, Voice, Fashion and Room Building.

The Bot Band competition was a building competition where users had to make a room for a bot to perform in. The only rules were it had to contain a Drum SFX, a Mars Walk and a Black Stage Piece.

The competition gave out badges for participating, top 100 and top 10, but it was changed in late November as it was discovered there was a glitch where users could enter without having the required furni. The badge was changed to a troll image with the code 'GLITCH' and it was re-run.

The re-run competition gave users one of the following badges (again for participation, top 100 and top 10).

The winners of the competition in the UK were:

The Bloopers Video Competition asked users to create a song and video it - then upload the funny bits (mistakes) as a blooper video to YouTube. The winners were picked by the number of Likes on YouTube (after being reviewed by Habbo Staff).

The winners won a trophy from Puffin and a badge.

To win the Fame competition, Habbos had to receive as many respects from other users on the hotel. There was a badge for everyone who participated, the top 100 most-respected and top 10 most-respected.

The winners (excluding banned users as of January 2018) were:

There was a set of quests for Habbos to complete to win the final badges.

The first set of quests were easy ones where Habbos learned how to sing. Everyone who completed all of the below quests got a badge.

Learn To Sing!
Pick up a mic from the Habbo Stars Lounge and activate the effect

The basics...
Jump on a stage with a microphone and say the words "I love you"

Rhyme Time
Kick off your rhyme by saying I three times, to a crowd of at least 10 people

BOT Star
Find out the name of the bot (Botcelli) in the Backstage room and speak it outloud!

The second set of tasks focused around learning to dance. Everyone who completed all of the below quests got a badge.

Dance!
Dance to complete the challenge

Moonwalk
Walk on a Marswalk tile

The third set of tasks focused on becoming a VIP rock star. Everyone who completed all of the below quests got a badge.

Answer Journalists
Stand with five journalists with a microphone

Have Fans
Have ten 'fans' stand around you with love signs

There were four new Effects added for users at the beginning of November.