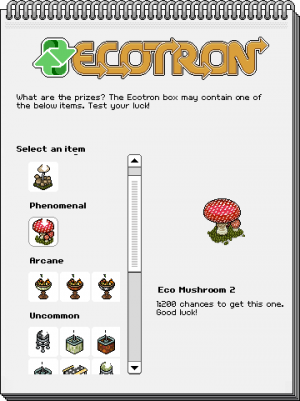 The Ecotron was first introduced in March 2007 with the function of transforming unwanted Furni into new exclusive pieces of furniture which could only be attained through recycling. The Ecotron menu was accessible from the Shop within the Hotel, paired with instructions and an up to date list of attainable Eco Furni.

This tool was removed from the catalogue on August 24, 2012. It was replaced by the more modernised Furni-Matic with different furni rewards.

To recycle using the Ecotron, five eligible Furni (Furni that carried a green recycling symbol) would need to be dragged from your inventory into each of the five recycling slots.

After all five slots were filled, the Recycle button could be clicked, depositing an Ecotron prize box into your inventory. This could be placed in a room and opened, or traded in its unopened form. 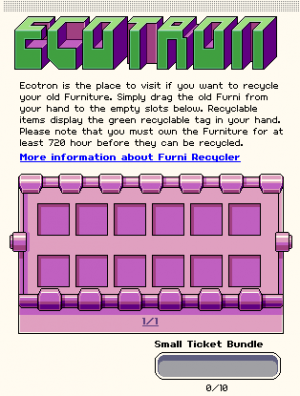 The Ecotron interface. Drag and drop Furni into the spaces to recycle

The Tickets, Palm Chair, Water Garden and Polar Sofa were all first released in March 2007 in the Finnish Hotel, the Moon Lamp was first spotted in the UK Hotel in March 2008, and the Eco Penguin Statue in 2009.

On the 4th of May, 2012, it was announced that the Plasto furni range would be leaving the Habbo catalogue for good on the 12th of May that year. During this time, the Ecotron would only recycle Plasto furni and, instead of needing 5 items in order to recycle, only 3 Plasto furni were required. All the rewards had been changed during this promotion too and included furni from a new line of Black Plasto furni. 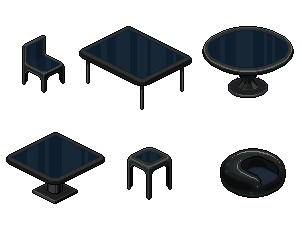