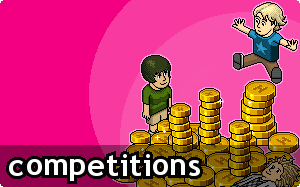 Habbo Competitions are official competitions run by Habbo Staff for all members of the community to enter and win prizes. Competitions vary from simple quizzes, to room design, to graphic art, and prizes can include badges, furniture and occasionally real-life prizes. Habbo has used competitions as a platform to engage with and entertain the community since the launch of Habbo Hotel, but the nature of these competitions has varied massively over the years.

One of the earliest types of competition was writing competitions. Ever since the launch of the weekly Newsletter in 2001, Habbos have been able to submit their own poems, articles and stories for publishing in some form on Habbo. Each week, a selection of submissions from Habbos were published in the Newsletter, usually one poem, one safety article and one other article. The prize for having your submission published was a Typewriter.

Since the discontinuation of the Newsletter, the amount of writing competitions has severely diminished, although there is the occasional competition. Early competitions included story-writing competitions, and writing useful guides for the Help section of the Habbo website. More recently, in 2014, Habbo Staff challenged users to write anthems for the three teams participating in the Back to School 2014 campaign.

Other 'writing' competitions have involved writing text for a new bot, interviewing Habbo Staff, and writing news reports and reviews on Habbo, such as during the 2005 Always Salon event.

Room-building competitions also date back to the early days of Habbo and have remained a bedrock of the Habbo community. Habbo Staff will set a theme and a set of parameters within which Habbos must design the best room. Habbos submit their creations by taking a screenshot and e-mailing it to Habbo Staff. These competitions are normally judged by Habbo Staff and the winning designs published on the Habbo website.

In 2012 Sulake trialled a new way of judging these competitions, by having other users vote. Room-builders submitted their rooms using a small window that would pop-up when they were in their own rooms. Other Habbos could then vote for a room each day, giving it either 1, 2 or 3 votes. This system was found to be open to cheating, and so an improvement was made whereby voters had to purchase a badge for 1 credit before being able to vote. This was to reduce the amount of Habbos voting on clone accounts.

This automated, community-led system was eventually dropped in favour of the original Habbo Staff-led competitions, which returned in 2013. By 2010, there had been a growing sense among the Habbo community that room design competitions had become the preserve of the wealthy: only those with significant amounts of rare and beautiful furni could design rooms that created the "wow factor" necessary to win. As such, Habbos often saw the same users winning room competitions each week and felt that this was favouritism on Habbo Staff's part. This was one of the factors that led to the launch of Builders Club in 2014.

Art Competitions are another type of contest that goes back a long way. This type of competition was popular in the early years of Habbo, and would invariably involve users drawing some kind of Habbo- or theme-related picture (for example, a new piece of furniture). As these were the days before widespread camera phones, Habbos would often post their entries to Habbo, and a member of Habbo Staff would have to go to the local Post Office to collect them! Although some drawing competitions are still run, submission now is by e-mail only.

Graphics Competitions, or computer-based art, is another competition format that has proved popular on Habbo.

Competitions such as StrayPixels on Habbo.com and Pixelolymp on Habbo.de are regular competitions - the former has had three different series (pre-merge, post-merge and Facebook orientated). The Facebook series included one competition, to design a new furni which may then later be used in the hotel, this way, Facebook users could vote for their favourite whereas before it was down to interpretation of NotMiceElf and others on the judging panel. With these competitions came Super Rare prizes with badges and StrayPixel Easels for winning once, thrice, five, seven or ten times.

Other Graphic Competitions have occurred when players from each hotel had to design a new outfit for a Habbo player, the winner would then have their outfit available on Habbo for the future. This was judged by Miley Cyrus and a male jacket, equipped with fur won. This was an example of a one off competition which hasn't yet been repeated.

Throughout late 2006 and early 2007, Habbo.co.uk also ran a fortnightly comic competition, as well as a banner-design competition.

Quests have existed in two forms in Habbo. Before 2008 this form of competition was very popular, and nearly every major seasonal campaign would involve a quest. These quests looked very different from those found today, as no Wired furni existed. The quest would have a theme-related storyling; examples include a quest to rescue the Easter Bunny at Easter 2005, and to solved the Habbotics mystery during Halloween 2005. For these quests, users would have to travel through a series of rooms which primarily consisted of three challenges: mazes, riddles and pet challenges. Mazes would involve either mat mazes or traditional stacked furni mazes. Riddles would be set by hiding various stickies in a room such that only their corners were visible from behind furni. Habbos had to find the correct stickie which had a riddle on it which would give them the password and name of the next room in the quest. Pet challenges were also used, and involved having to navigate round a pet in a confined area, using commands to lure the pet out of the way. These kinds of quests were a big part of the Habbo community pre-2008, and Habbox even had its very own Quest Department for a short while. A regular competition called the Quest Guild was also run, where Habbos would submit their own quests.

More recently, the word quest has come to denote another kind of activity within Habbo, where participants completing various activities to earn badges and different forms of currency such as Hearts, Diamonds and Seashells. These were mostly implemented throughout seasonal events such as Christmas, Summer and Valentines; they could be converted into different furni items (some of which were untradeable) or rares. Recently, though, Habbo have transformed these and increased the number of such quests due to the removal of Pixels and now pose them throughout the year to gain more badges, and different items in case players wish to redeem them to purchase items.

Habbo has also used quizzes as a means to give out prizes. Quizzes are normally given in the form of an in-client poll in a specially-made room, and were initially used during promotional campaigns. Over time they have increased in frequency and now some form of in-client quiz forms part of many seasonal campaigns.

Many other events also include Telephrase style questions, which can be seen as an element of quizzing.

Various Habbo communities have, at different times, hosted weekly competitions. The most famous of these is Funky Friday, where Habbos

on Habbo.co.uk could win huge prizes by answering one simple, multiple-choice question. In its first incarnation, users would have to ring up a premium-rate phone line, costing 25p per call. For the Funky Friday revival, Habbos could enter for free.

Other weekly competitions have also existed such as WTF(riday) where Habbos would submit questions to ask Staff. Sometimes themes were given each week and players submitted their questions to receive prizes. Random questions were answered, and themes such as Girly Week were used, prizes were almost always different each week but due to the removal of articles, the competition was removed too. The prizes were sometimes given in relation to the theme such as Halloween and Christmas.

Throughout December 2009 Habbo created a one off competition via the use of Penguins whereby you needed to log in each day to receive a new one, these would then create a collection and if participants had collected each one they would then receive the rare Penguin Gift. This was different in other hotels as Habbo.co.uk required you to log in each day to receive the Penguin and if the player missed one they wouldn't receive another. However, hotels such as Habbo.com gave players a penguin on whichever day they chose to log in - this would mean if they only logged in one day they received the penguin for that day. December 2010 was similar in fashion to that of the previous year, this would require players to log in each day to receive different prizes. These included, badges, furni or Homepage Stickers but still followed how they had to log in to receive them - not only that but this was called the Advent Calendar as a different thing was given each day.

More competitions included concentration and eye for detail, this included Easter 2011 whereby players had to go through a variety of rooms to find out how many Easter Eggs were in the rooms overall, the correct answer was over 1000 yet someone who guessed 800+ won - the article given was removed afterwards as Habbo.com (International) had made a mistake in counting due to them saying players must count all eggs, which included the Easter Ducks and such. However, in other hotels such as Habbo.de they were told not to, thus confusion laid there. This was a one off competition and Puffin said that cheaters were amongst the players in the competition but deemed those who had the correct guess of over 1000+ as them [the cheaters] because supposedly they went on other hotels for the answer - this was incorrectly written due to those who had the answer at 800+ were the cheaters.

Cultural Competitions were done too, things like Chinese New Year whereby players were required to name a new Dragon, create Fortune Cookie messages and create rooms to receive prizes. This competition has so far only appeared as a one-off, only occurring in 2012.

Older competitions from previous Hotel Managers such as Habbo Rugby, Rare Grabbers have also taken place, these were a series over a few weeks and prizes such as Dino Eggs, Gold, Silver and Bronze Dragon Lamps were available as prizes.

More recently, Habbo has increasingly used Wired furni to create interactive games where Habbos can win prizes. The first large-scale Wired campaign was the Games Hub, where several Wired games created by Habbos from all over the world were released, allowing Habbos to win one of several prizes, including badges and Avatar Effects.

Prizes won in competitions have changed over time. Initially, prizes were almost always a selection of rares, and a trophy from the Hotel Manager. Sometimes credits were given out instead, or HC subscriptions, and for several competitions real-life prizes were given, such as console games, books, clothes, skateboards and even holidays. Several winners have in the past won a visit to their local Habbo Office to meet staff.

During 2005, Habbo began to award users with permanent badges for having won competitions. This was incredibly popular before this, only the HC badge was available to regular users, and so Habbos began collection competition badges. Since this time, the number of badges in Habbo has sky-rocketed and there are now over 1,000 badges in use in Habbo.com (International), and badges are normally the only prize given out in many competitions and events.