Wired was released into the Habbo catalogue in late October 2010[1], a revolutionary new feature which changed the way events, mazes and even small features as walking through a door forever. Since then, the popularity of Wired has grown dramatically with more and more ways of combining wired to do amazing things around the Hotel. New Wired boxes have been added in the years since, such as leaderboards, bot-controlling boxes, handitems and Viking (time-limiting) wired.

Wired is split into four categories: Triggers, Effects, Conditions, and Add-ons and is sold throughout the year in the Shop in its own special category.

When Wired was released, new non-wired furni was released too, including items such as Floor Switches, Coloured Tiles, and Glow-Balls, which were introduced to work with Wired for events and games.

Triggers let you define what needs to happen for an Effect to take place. To program a Trigger, place it in a room, double-click on-air and set it up! You need to stack an Effect with the Trigger to make it work.

Previously, 'User Walks off Furni' and 'User Walks on Furni' triggers were also available to purchase for 1 Credit and 150 Duckets, this option was eradicated with the introduction of Habbo 2020.

Effects are what happens after you activate a. To program an Effect, place it in your room, double-click on it and set it up! You will always need to stack a Trigger with the Effect to make it work.


Previously, it was possible to purchase the "Teleport to Furni" effect for 2 Credits and 150 Duckets, and the "Toggle Furni State" effect could be bought for 1 Credit and 150 Duckets. These options were discontinued with the introduction of Habbo 2020.

Conditions are specific things that need to be done before a Trigger will work. If you want to use a condition, you will need to stack it with a Trigger and Effect.

Conditions "Has Furni On" and "Group Member" were both previously available to purchase from the catalogue for 1 Credit and 225 Duckets, however this option was removed with the introduction of Habbo 2020.

Use these simple Furni to bring extra spice to your Wired room. These are basic Furni, so you will still need Triggers, Effects, and Conditions to make them work.

The "Color Wheel" is no longer available due to the Gambling Ban.

The "Glass Door", "Wall of Flame" were temporarily removed from the catalogue following the introduction of Habbo 2020; but were previously available for 3 Credits (or 150 Duckets) and 5 Credits, respectively. Since the launch of the Air client, these have once again been made available for purchase in the catalogue.

In mid-2022, Habbo announced a series of Wired updates that were due to be launched onto all Hotels. These included bug fixes, alterations to existing Wired and the addition of new wired, leaderboards and add-ons.

The release of new Wired add-ons included four new counters that counteracted the current counters used (i.e. Freeze Counters, Banzai Counters and Football Counters), as they count up rather than down.

Twelve leaderboard Wired items have been consistently available to purchase from the catalogue; these are split between best scores, most points and team accomplishments.

As part of the additional Wired items released in mid-2022 amongst Habbo's Wired updates, eight new leaderboards were added to match the function of the new counters. These organised winners by either fastest or longest time within the game.

Sound FX furniture will make sounds when u wire them correctly. Users often use these to make a 'doorbell' or when they are afk.

These are staff exclusive wired. 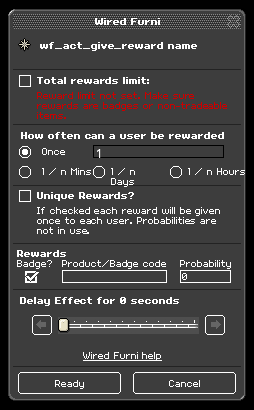 The inside of a 'Reward Wired'. Only Habbo Staff can save the configuration. 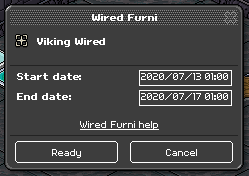 The inside of a 'Viking Wired'. It got its name from being first used in tandem with the release of viking furniture. Anyone can save the configuration. Uses the GMT timezone.

Wired deals are sorted packs that were available for purchase in the client. However, these are no longer included in the catalogue. These deals can contained bundles of wireds or a complete set of certain wired.