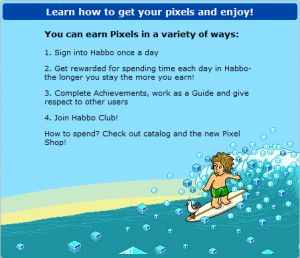 Pixels were introduced in November 2008 as a form of points on Habbo that users were able to acquire by spending time on the Hotel. Users were able to buy a small range of furniture. It must be noted that Pixels could not be traded between users or exchanged like Credit Furni. To acquire pixels, users had to log in, receive them every 15 minutes, complete achievements or quests, or join VIP. Users were also able to redeem their pixels for special effects to make their Habbo avatar look more unique. You also had the opportunity redeem pixels for some pieces of furni. Sometimes it required users to add credits along with pixels to make a purchase, so it was important to double-check the price of an item before immediately buying. On the 8th of June 2012, it was announced that pixels would be leaving Habbo on the 19th of the same month. Most Habbos agreed that it was a needed change, whilst some disagreed. A special set of Pixel furniture has been released to commemorate the event. 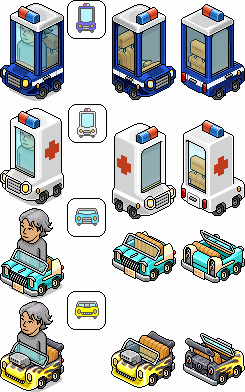