Twilight furniture was first introduced in November 2009 to coincide with the release of the film 'The Twilight Saga: New Moon', this was a Halloween and Gothic style range which appeared suitable to the genre of Twilight. The range consisted of 16 released items, but also included a Super Rare Twilight Trophy that was only given to a select few.

The items appear popular all year round and the prices are reasonably expensive, the Twilight set is one of the most wanted movie Furni ranges and has shown to be popular since its first release, unlike others such as Igor

Build your own vampire mansion, host a birthday event and win a spot in the finale!

It's time to be a part of The Twilight Saga: New Moon and sink your teeth into the first competitions. We invite you to celebrate Bella's 18th birthday with her vampiric boyfriend and in-laws. Create a birthday room, host your own party and earn a spot in the finale!

Room Building Competition: Build your own version of the Cullen's Mansion

So how does a vampire live? Judging from the Cullens they have pretty modern tastes for their infinite age. Who says vampires are old-fashioned ;) . Use the new Cullens Furni to make a stylish Mansion that they would approve. From Tuesday to Friday, we will pick the best room and publish it on The Twilight Saga: New Moon Group. Also, all four winners will win a spot in the finale and a Level 2 Cullens Badge!

You don't get to be 18 every year. But how does a vampire celebrate a birthday if they can't eat cake? It's up to you to think up the best birthday event imaginable and host it in your own room. Send us your event in the poll below and don't forget the correct day and time. From Tuesday to Friday we will post the best event of the day on the The Twilight Saga: New Moon Group. Is your event chosen? Then you have won yourself a place in the finale and a Level 2 Cullens Badge!

So there you have it: eight chances to win a spot in the finale on December 4th. Don't forget to join The Twilight Saga: New Moon Group to meet other fans of the movie. 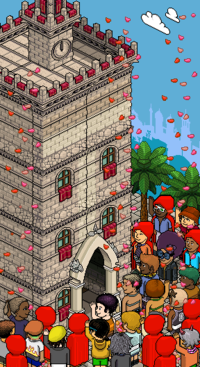 Join Habbo's search for the biggest fans of The Twilight Saga: New Moon

Ever wondered what it would be like to have a vampire boyfriend? To have superstrength and special powers? If so, then you are probably one of the millions who can't wait to see the sequel to Twilight, The Twilight Saga: New Moon!

This year, Habbo joins forces with the supernatural in a global search for the biggest fans of The Twilight Saga: New Moon. During three weeks full of events, quests and new furniture, we invite you to learn more about the movie and live inside the world of Bella Swan, Edward Cullen and Jacob Black. Each week, we will reveal a new part of the story with new chances to earn a spot in the grand finale on December 4th. Will you claim immortal fame and be the Habbo's Biggest New Moon Fan?

Be a part of the story with The Twilight Saga: New Moon Furni Watching the movie is one thing, but to be a part of it is even better! In Habbo you can become involved in the story, build you own fanrooms and be a part of The Twilight Saga. To help you become a vampire, we have new Furni available every week. Get the new Cullens Furniture, make your own Mansion the Cullens would be proud of and celebrate Bella's Birthday. All items will be available until November 16th after which a new collection will be released.

Become Habbo's Biggest New Moon Fan On December 4th, Habbo's Biggest New Moon Fan will be chosen in a grand finale. To earn a spot in the finale, you have to participate in the various events, competitions and quests that we have in store for you. During this you will learn more about the movie, get to know the world of the Cullens, the Werewolves and the Volturi Vampires and be a part of one of the biggest movies of the year. What are you waiting for? Get started and be the first one to make it to the finale!

Trivia Quest 1 - Bella and the Cullens 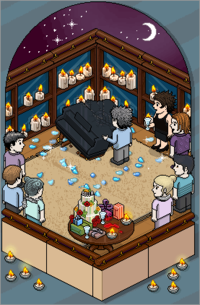 Do you know everything there is to know about Bella and the Cullens?

After visiting the fanrooms made by you, we're sure of one thing: Habbo absolutely loves The Twilight Saga: New Moon! Luckily, we're not nearly done yet in our search for the Ultimate New Moon Fan. Every Friday we have a special Trivia Quest for you, for the truest fans of the story. Do you know everything there is to know about Bella and the Cullens? We dare you to try!

Trivia Quest 1 - Bella and the Cullens

Put your immortal knowledge to the test and participate in the first Trivia Quest. Visit the first room of the Quest. Here you will find a special vampire-bot who (if you ask him) will ask you a question with two options. Choose your answer and he will direct you to a new room with a new question. If you answered all questions correctly, you will be lead to a final room with a final question. Fill the answer to this question in the poll below and send it in before Monday the 16th of November.

Good hunting and good luck! Oh and don't worry about the various bots during the Quest: they won't bite... I think.

Jacob and the La Push Reservation

Are you Habbo's biggest The Twilight Saga: New Moon fan? There's still plenty of time for you to prove it.

The Twilight Saga: New Moon is alive in Habbo and we've already celebrated Bella's birthday in true vampire fashion. In this our second week, we'll replace those fangs with claws and discover more about Bella's new best friend: Jacob Black, keeper of a furry secret. We'll be forming our own wolfpacks and giving away more spots in the finale, where the Ultimate Habbo New Moon Fan will be decided.

To help you on your way, the second batch of Furni has been launched in the Twilight section of the Catalogue. Be inspired by the great outdoors and create your own garage/repair shop, or simply design a version of the La Push reservation.

Room Competition - Create your own wolfpack den Members of the wolfpack hold friendship in high value. So we decided it would be wise if Habbos make their own outdoor spot for their wolfpack. Use the Furni currently in the Catalogue to make your own wolfpack spot that Jacob would be proud of. From Tuesday to Friday we will select the best rooms and publish them on the The Twilight Saga: New Moon Group page. The creators will win a Level 2 Wolfpack Badge and a spot in the finale.

We're launching two more competitions to help you prove to everyone that you are Habbo's biggest The Twilight Saga: New Moon fan!

Alteration Competition - Pixel Your Best New Moon Fan Art We want to find Habbos who love The Twilight Saga: New Moon and aren’t afraid to show it! We invite you to create your own work of art inside the world of New Moon. Recreate the movie poster using your own Habbo, make an animated gif about your Habbo dreaming of Edward or Jacob, or create anything else that proves you're a big fan!

So what is there to do in the great outdoors besides looking ruggedly handsome while walking in the forest? Apparently werewolves are social creatures so it would be good to host some events for your furry gang. Fill in the comp form below with the details of your event. From Tuesday to Friday we will select the best event of the day and publish them on The Twilight Saga: New Moon group page. The winners will score a Level 2 Wolfpack Badge and a spot in the finale!

What do you know about the Volturi? This is your final chance to snare a spot in the grand finale! 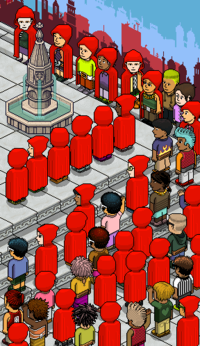 Not everyone is fit to be part of the Volturi, but do you know everything there is to know about them? If so, this is your chance to prove it. Make this entry count because it’s the last opportunity to win a spot in the finale!

Quest 3 - The Volturi Visit the first room of the quest to begin. Inside a bot will ask you a question about the Volturi. Each answer will lead to a different room - choose correctly and you’ll be presented with a new question. Choose incorrectly and you'll have to start all over again, so make a note of the answers as you go along to avoid frustration later on!

Once you make it to the last quest room, a Volturi member will ask you a final question. Please enter your answer in the competition form below.

Five lucky Habbos who answer the final question correctly will win the Level 2 Volturi Badge, a Rare gothic ectoplasm fountain and a spot in the grand finale!

All other Habbos who answered the question correctly will win the Level 1 Volturi Badge.

Over the last three weeks, we learned how vampires celebrate birthdays, what werewolves do in their spare time and how to handle being a royal immortal. Now is the time to find out which one of you really is the biggest fan of New Moon. During an exciting Trivia Event on December 4th, we will determine the Habbo with the best knowledge of The Twilight Saga.

The Twilight Saga: New Moon Finale On December 4th, from 4:00 PM, we will close down The Picnic Area for the public and make it only available for those Habbos who won a spot in the finale. All other Habbos can watch using the Spectator Mode to see how things are going. During the finale we will challenge you with the ten most difficult New Moon questions around. Only the biggest fans will be able to answer these questions, so you better stock up on your knowledge of vampires and werewolves. All finalists will answer their questions through Minimail to the Habbo Staff present. The Habbo who answers correctly first will win one point. After ten questions, we will look at who won the most points and this Habbo will become the Ultimate New Moon Fan!

Besides eternal glory and respect from fellow Habbos, the winner will be awarded a special prize: a Trophy and the Level 3 Badges for the Cullens, Wolfpack and Volturi.

Do you know who will be the Habbo’s Biggest New Moon Fan? Make sure you check out the finale to find out!

When The Twilight Saga: New Moon was released on DVD in 2010, habbo held another competition. Habbo's had to answer 5 questions about the movie, and if they answered all the questions correctly they could win 1 of the 1000 Target Wall's and a Target Badge.