SnowStorm (also known as SS) is a game on Habbo based on an older Sulake game called Lumisota. The aim of the game is for players to try and throw snowballs at others to earn points for their team.

SnowStorm was released in late 2006 and was available until the New Habbo update in 2009, when the hotel moved from the Shockwave client to the Flash client. It was reintroduced under the name SnowStorm Shuffle from December 2011 to 2014. The most recent version of the game was released in April 2021 and is available on the downloadable Habbo AIR Classic client.

Lumisota was an early Sulake game, released after the success of Mobiles Disco. Players were split into teams and had to shoot Snowballs at each other. The fundamentals and many design elements of the game formed the origins of the Habbo version.

Players had to use Gaming Tickets to purchase a game of Snow Storm. Tickets cost 2c for 5 Gaming Tickets (later 1c for 2 or 6c for 20). Players could either choose to join an existing game or create a new game, where they were able to choose a map, set a time limit, and select whether it was a team game or individual.

In 2009, when Habbo changed platforms to Flash, from Shockwave, Snow Storm was removed along with the other Official Games.

When Snow Storm was removed, Habbo developed a range of game furniture called Freeze (along with Battle Banzai) intended to replicate the functionality of the game in user-made rooms. It was released on December 15, 2010 and came with a range of furni including team gates and scoreboards, and a set of Achievements.

The game was initially well-received and popular in the hotel.

Due to popular demand, and the decreasing interest in Freeze furni, Habbo reintroduced Snow Storm to the Hotel. It was re-released on December 12 2011 under a new name - SnowStorm Shuffle.

Soon after the launch of SnowStorm Shuffle, a new public room was introduced where players could start SnowStorm games from - the SnowStorm Lobby.

SnowStorm Shuffle was removed entirely in 2014 along with all the other games featured in the Game Centre.

In March 2021, Habbo staff suggested that SnowStorm was making a return again with a tweet. They then promoted the return of SnowStorm on Twitter and Youtube before its released on April 23.

Users receive three free game tokens a day (or 30 tokens for HC users) and extra tokens can also be bought. A leaderboard shows the top players on the hotel and a user's friend list.

SnowStorm can only be accessed through the downloadable AIR Classic client.

The 2021 return of the game saw the introduction of numerous achievements under the Games category.

Snow fight and the seen targets

Differing levels of this achievement was awarded to players based on how many opponents they had hit in-game. 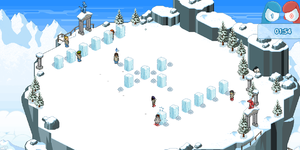 One of the maps in the re-released SnowStorm Shuffle game

The aim of the game is to win points by throwing snowballs at the opposing team. Players are randomly allocated to a team of up to nine others (although in older versions, there were 3 teams, and an option for a game with no teams).

Once the teams are full, players enter the playing arena. Players can see their Habbo's head (with a snowy outfit on), energy, points they've scored, how many snowballs they currently have, time remaining and overall points for the two teams. There is also the option to leave the game.

Players move around by clicking squares - the normal way players move around on Habbo - and clicking on a Habbo throws a snowball at them. Each player can only take five hits, any more than five and they will fall to the ground, frozen from play for five seconds.

To throw snowballs over large objects (such as trees), players can click the Shift button whilst clicking on the opponent.

Once the player had run out of snowballs, they need to click the 'Scooper' button, which makes their avatar go down to the floor to scoop up some snow to create a snowball.

Below you can see screenshots of the game over the years, promotional artwork and features within Habbo Hotel

There was also a range of Habbo Home Stickers released alongside SnowStorm: