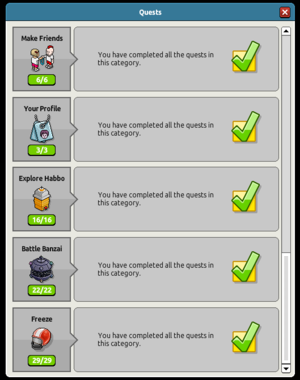 Quests used to only be done near seasons such as Christmas but recently Habbo released Quests mainly suited for the newer characters. Although these Quests are different to those that are held near major events in the year, you do gain something from doing them; Pixels. Quests for the major holidays in the year can allow you to gain Snowflakes, Hearts and Seashells in past promotions to gain Gifts linked to them such as Snowflake Gifts, Heart Gifts, and Shell Gifts.

Currently, we use a free currency know as duckets which could be earned from doing quests and just by logging into Habbo!

Quests could be done by clicking the clipboard icon with the checkmark on it and activate one of the quests. If you could not go any further in one of the quests you could simple activate another one, the progress of the previous quests would be saved and could be completed later on.

By doing the Battle Banzai and Freeze quests, achievements could be earned. With up to 10 achievement levels for both quests.

The Make Friends quests are the first in the list that can be completed. Simple tasks such as chatting or waving at someone making this, with only 6 quests to complete and the 'Your Profile' quests the two simplest quests in the list.

The 'Your Profile' quests had 3 tasks and were easy to do. All you had to do was change your look, motto and wear a badge.

In order to complete this quest all you had to do was finding certain items and double click or walk on it. The quest consisted of 16 tasks and many Habbo's made certain 'Quest Rooms' with all the items in it to make it more easy to complete it.

This quest was mainly focused on the Battle Banzai game and consisted of 22 quests. The first 3 quests could be done by simply double clicking on the items. the other quests are actually about playing the game. Note that for the winning quests you needed to have someone from the opposite team in order to complete the quest.

Just like the Battle Banzai quests, the Freeze quests focused mainly on the Freeze game. Although Battle Banzai doesn't feature power-ups, these tasks can be a little bit trickier to complete since there are no Ice Blocks in the Builders Club section.