Room Events was the system for promoting a room before the introduction of Room Promotions. Unlike Room Promos, Room Events were completely free (didn't cost Duckets or Credits to use) and could be made by any user on the hotel. They were first introduced during June 2009 on Habbo BETA and were removed on June 20th, 2012 due to concerns made by Sulake (and TV network 'Channel 4') over how the filtering system was easily bypassed and abused by any user creating an event.

Unlike Event Promos, Room Events were not in a separate box on the right-hand side of the Client but instead were merged into the Room Settings box. An event name and description were mandatory for creating one, whereas the category and tags were entirely optional and not used as often as general room tags and categories.

Room Events appeared regularly on the Navigator and were a method of boosting room popularity very quickly for some users. The image below shows the creation box for Room Events: 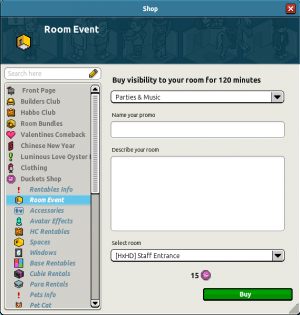