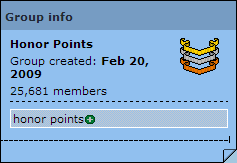 Honor Points were a form of reward system developed for runners up in Habbo Competitions (specifically room building competitions). It did make an appearance on Habbo.com.sg and a handful of other hotel before the Merge in which the Gold Trophy, Silver Trophy and Bronze Trophy were given out, but it was also used on the Habbo.com (International) hotel.

The system was first introduced to the Habbo.com public on the 25th June 2010 and staff claimed it was an additional way to reward Habbos for their good deeds and efforts by still giving to other participants in competitions to eventually claim a prize. For each user that acquired an "honourable mention", they would obtain one Honor Point on the leaderboard located on the group page. As users acquired points they would progress through three different levels, each with a different coloured Trophy prize, until they reached the maximum of 30 points - the point at which their points would be reset back to zero.

Some participants were lucky enough to start off with seven points as they had previously been on the leaderboard before the hotel merge, but even this "head start" wasn't enough as no users managed to get to the highest level for prizes. Only a handful of competitions, for example, the Habbo Mall competition, gave users the chances to acquire Honor Points until Sulake Staff lost interest in the system.