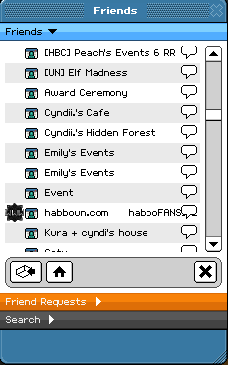 Group Chats are a discontinued feature of the Habbo Client introduced on the 17th January 2017. The chats enabled members of various Groups on Habbo to communicate with each other in one single chat, which was a completely new feature to Habbo at the time. Players could either use the Habbo Console or the Friend Bar to open the chats and at the time of release, only administrators of groups were able to make use of this feature.

Group Chats were removed from the Hotel a little over 24 hours after their public release.

Group Chats is commonly regarded as one of the more unsuccessful Client Updates, with the feature being removed being little over 24 hours after the release, on January 18th.

There are many speculated reasons as to why the feature was removed, but it was most likely due to the fact that they could not be hidden on the Friend Bar, only removed by leaving the group altogether, which caused the Friend Bar to appear more crowded than usual. Another commonly cited reason for the removal is the fact that only administrators could make use of the chats, and more importantly, it was very easy for group members to spam inside the group chats and disturb other players who had their sound enabled.

While group chats did not return in their original format, Group Forums allow for structured, permanent discussions among members of a Group