Beta, or New Habbo as it sometimes called, was the largest update in Habbo's history. It was first released in late May 2009, and lasted until November of the same year. The beta was mainly used to facilitate the change the Client from Shockwave to Flash. Due to the change, the entire client had to be coded from scratch, therefore creating many bugs and inaccuracies. To find these bugs, Habbo executives decided to allow a select number of users to test the new Hotel extensively. During the BETA stage, testers could access both Old and Beta Habbo, but this was removed when the old Hotel was deleted, making New Habbo the main and official client. 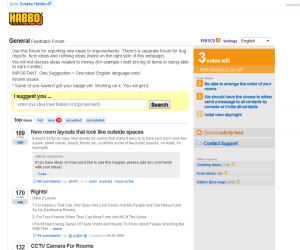 On May 15, 2009, Habbo released a news article telling players about the Beta testing. In the newsletter, players were given the option to sign up to be an official Beta tester.

On June 5th, the first 50 Beta testers were selected by staff.

On June 16th 2009, Beta was officially open for the testers. As well as the 50 original (selected) Beta testers, 500 other Habbos, were given the privilege to access Habbo Beta also, chosen on the basis of how active the user was.

On June 23rd, 2009, invitations were introduced. Each tester was given 3 invitation codes, which could be generated, copied and pasted to friends who wanted to participate in Beta testing.

That tester was also give 3 codes, expanding the group of testers greatly. The testers were given a special Beta badge for their participation and also access to an exclusive 'Beta Testers Only' group. Here, the testers would create threads with feedback from Beta. All they had to do was report any bugs and glitches they found.

On July 15th, 2009, Habbo announced that Beta was now officially open to the public (Open Beta). A new group was created, called 'Open Beta Group'. All users still had access to the old client, as well as the new client.

On November 3rd, 2009, Habbo announced that Old Habbo was about to be removed and replaced by New Habbo (Beta). Some features included in the old client, such as the Big Hand and the Hotel View was taken away as well. A group was made for the dedication of Old Habbo in general, and memorial furniture was released to remember the old client. The client officially changed the next day.