Wobble Squabble is a two player game that could be found on Habbo in the Rooftop Rumble public room. The idea of the game was to keep your balance whilst trying slap and nudge your opponent until they fell off the buoys and land in the pool.

Every monday morning a list was made of the 20 best players from the previous week The 20 Habbos who scored the best in that week received a special Champion Badge.

Every month there was a special reward for the numbers one, two and three of the total monthly score. These Habbos would receive a mythical Metal Dragon on the first business day of the following month. The number 1 received a Golden Dragon. the number 2 a Silver Dragon Lamp and the number three a Bronze Dragon Lamp. 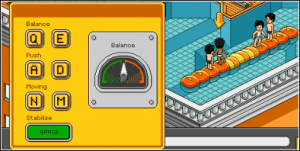 In order to enjoy a game of Wobble Squabble you first had to buy a ticket. The tickets were the same ones that could also be used in the game Lido Diving and cost 2 credits for 5 tickets. You could purchase tickets by clicking on the buoys, or by clicking on the ticket machine beside the pool of the Lido.

Once you had purchased your ticket, you could get into the pool, swim over to the buoys and climb onto them to queue for your turn at the game. The game started when two players were ready (one at each end). To move LEFT and RIGHT you had to use the keys N and M and to keep your balance you had to use the keys Q, U, A and D (see image on the right).

Many users hope for this to return one day but since Habbo was updated it has disappeared and not been seen again since! Since the closure of the official Wobble Squabble, Habbo's began to make their own version of Wobble Squabble in private guest rooms.

Badge given to the top 20 with the most points of that week.