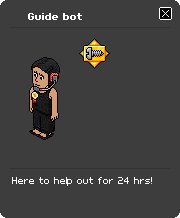 The Guide Bot was a feature to give help and advice to Habbos. They were released in the Beta and could either be called by the room owner or appeared when a Habbo first signed up. They would give information about features of Habbo after being prompted with keywords.

They were removed and replaced with the Habbo Helpers program

Habbo Guide Bots were usually described as "annoying" because they would issue their responses as long as the owner has any of the keywords in their sentences and usually flood the room, so most owners chose to kick the bot out. Some users would purposely flood the room by repeating 'ff' over and over again as the Guide Bot's response was 5 lines long.

The Habbo could ask the bot questions and it will do its best to answer them. The Artificial Intelligence of the Guide Bots was not very good and it was rumored Habbo was to improve it, but it never happened. So the players were left with short commands that would do very basic things.