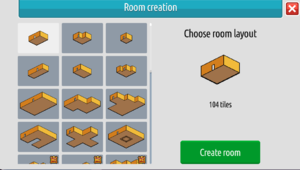 Rooms is a feature on Habbo giving users the ability to create and design hangout places for their friends to visit. They are organised in the Navigator and can be edited by the owner to make each one unique.

There are many room designs to choose from, greatly expanding over the years. Regular users can choose from 12 standard room designs and Habbo Club members can choose from a further 23 designs, bringing their total to 35 possible default options. These come in various shapes and sizes, and range from a tile area of 36-1044 tiles. Layouts are further customisable using Black Hole furniture. This piece of furniture has the ability to form a hole in the guest-room floor, making it possible to design your own room shapes.

Since the introduction of Builders Club users are no longer stuck to the pre-made rooms. When they have a Builders Club membership they can easily change the floor plan of it by going into Room Settings and 'Open Floor Plan Editor' or by typing :floor in the room. Previously this was limited to a maximum number of tiles, but has been changed to a maximum overall square area of 1024 - whether or not the tiles in between are used or not. The entrance of the rooms can be moved in the floor plan editor.

Official Rooms (previously known as Public Rooms) were rooms created by Habbo itself as a central hangout for players, as opposed to their own guest rooms. Official rooms have been around since Habbo's opening and have been one of the hotel's notable features. These rooms were much more unique than user-made guest rooms as they featured new graphics rather than standard pieces of furniture. In addition, Habbo Staff were the only individuals with rights, hence everyone was equal.


With the arrival of New Habbo, a few of these rooms were removed. However, in June 2011, a room building competition was held and further announcements revealed these user-built rooms would replace the previous Official Rooms. After the winners were revealed, their rooms replaced the official rooms both on Habbo.com and on international hotels.

Room Settings (or Room Info) is a pop-up box on Habbo where you can control certain aspects of your room such as the room name and description. This has also advanced over the years of Habbo, as there is an "Rights" section which allows you to moderate, who is banned from your room and who isn't.