Casinos are much like their real word namesake - players can bet and gamble Credits within them. A popular spin-off game is the Rare Grabber, and many still exist within casinos. 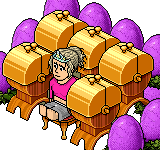 A player in a typical Casino Booth

Casinos used to be rife with scammers not handing out prizes, and many casinos are not trusted. The most popular ones are those with expensive furni, showing the owner's wealth. Many include Thrones, Dino Eggs, Dragon Lamps and stacked furni (such as DJ Turntables)

To play games at a casino, the user pays the dealer for that booth. The dealer then rolls the dice and the games play as described below. The user's rolls are rolled first, than if the user does not lose instantly, then the dealer rolls their rolls.

Sometimes when betting the dealer plays for 't=r' meaning tie=redo. Self explanatory you repeat what you've already done as you got the same amount. Most of the time, dealers say that if it's a tie then they (the dealer) wins).

Overall, the dealer has the advantage with rolling last as they know what score they need to beat.

To play 6, 13 or 21, 1, 2 or 3 dice are rolled and the bettor chooses whether to 'stick' or 'hit' (stick meaning stop at that amount and hit meaning roll another die). For example, if we're playing 13 and the dice rolled 5 and 4, this would make 9. If we hit, the next dice is rolled, if we stick we keep our score of 9 and then the dealer has their go.

This game is very similar to BlackJack or 21 played in real life.

13o is a variant of 13 where 5 dice are rolled at the same time. This variant has better odds for the dealer than 13 as you are likely to go over 13 with all 5 dice rolled, so sometimes the dealer offers better prizes for this variant than for other games.

This game is based off the real life game Poker.

In multi, the dice are rolled and then the numbers are multiplied to form your score, so 2, 5 and 3 would score 30.

In high / low, you simply add up the numbers of however many dice are rolled, and the higher / lower total number wins.

There has been a lot of controversy over the future of Casinos on Habbo. Recently, many Casino owners ended up with permanent Bans on their account for the promotion of gambling (this was probably due to the Singaporean hotel being against Casinos and gambling in general). They were unbanned afterwards but the name of 'Casinos' are no longer the same.

Most Casinos are now called Arcades to reduce the chances of being banned.

On August 2nd 2012, Habbo.dk's Sulake Staff members were ordered to disable all forms of dice (Holodice and Dicemasters) in the hotel and the Wheel of Fortune. This was due to the gaming authority "SKAT" claiming that gambling in Habbo was illegal. All Casino owners were permanently banned from the hotel and the restriction on gambling has not been lifted. This caused a massive decrease in the number of users (as well as the mute earlier in the year) and left many wondering what would happen to Habbo.dk in the future.

On the 18th February 2014, codes were found that suggested that a Dice limit would be enforced in player's rooms on Habbo. Depending on how many Dice could be used in a room determined the future for betting, Casinos and general pay to play/pay to stay games. When this came about, players had to wait just under 2 months to find out what the Dice limit was - which caused uproar immediately. The Gambling Ban was officially enforced on the 7th April 2014, after Habbo published an article informing players of their change for how games were played on Client. The article didn't just stop at Dice type objects, but all random chance objects including Color Wheels, Magic Crystal Balls and Wheel of Fortunes.

As Habbo didn't want to ruin the Casino industry altogether, they allowed Casino rooms to be used as a theme, but placing bets by outcome of a random element would be.