Shuffle-Ball is a game created by World-of-Habbo (Habbo.de) which featured as one of the games in the Habbo Games Hub campaign. The aim of the game is to lock 1 Battle Banzai Tile with your team colour, whilst fighting off opponents. Unlike many of the other rooms in the Games Hub, no badge could be obtained, but users could win Pixel Effects including a very old "X-Ray" effect.

Only 3 players can play the game at once (due to their only being 3 Battle Banzai team colours available in the arena) and they will be teleported to different corners of the arena before the game starts. Once the game has started, Banzai Pucks will be released and each player has to try and lock 1 tile in the centre via these Pucks (Empty Plates are used as a barrier so that users can't just hop over the tile quickly). There is a time limit on the game and if no-one successfully manages to lock the centre tile with their colour, no-one receives a prize. If one user does manage to lock the tile, they will proceed to the "Banzai Challenge", where they must race to the Arrow Plates before the time limit is up (unfortunately, the Wired furniture in this game doesn't work for the Banzai Challenge, so users get teleported straight to the prize zone). After that, they are teleported to an area to gain their effect!

The only tip for this game would be; to try and get into the game alone so that there's no-one to battle with. 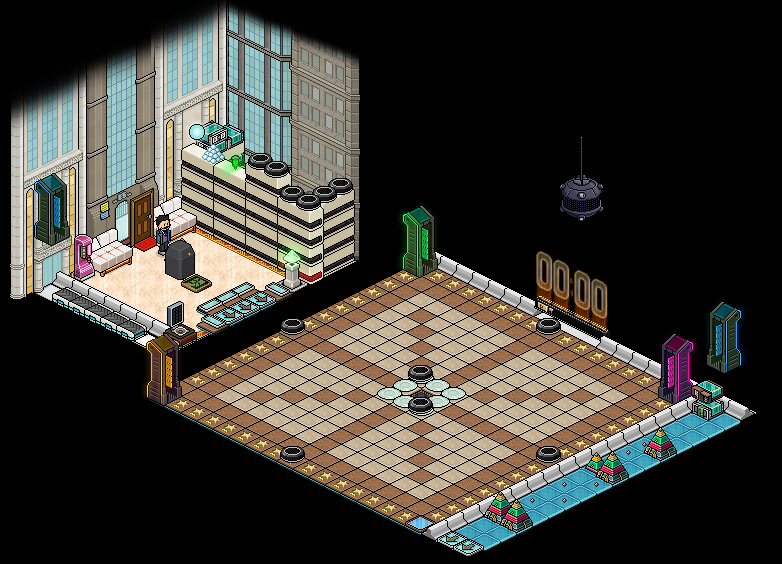