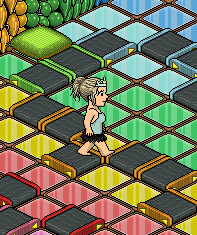 A Habbo in a Snake-type Maze

A Maze is a type of game room on Habbo in which users must navigate their way through obstacles, avoid getting trapped and sometimes answer questions in order to complete the game. Most mazes are user-created, but sometimes certain staff-held competitions encompass short mazes (usually Wired Mazes). Usually users won't give out prizes for anyone who completes their maze (due to the mass number of people completing it), but occasionally they may give out prizes if the maze is renowned as being "incredibly difficult". Mazes in staff rooms usually provide a Badge as a reward.

Mazes can be split into 4 different categories. These are:

Wired Mazes are the most common type spotted in the hotel today due to them providing much more variety (in terms of challenges) for users than other mazes.

It is also rather hard to end up stuck in one of these mazes, unless One Way Gates are used or if furniture is stacked up high in the air.

Rollers also make a common appearance in these types of mazes, but mats do not due to them specifically being used in Mat Mazes. Classic/Furniture Mazes are also one of the oldest types of mazes on Habbo!

These are known to be one of the most difficult types of mazes on Habbo if the room builder uses a huge variety of mats. These mazes require a lot of patience from users due to the ability to get stuck occurring every step a user takes. The only furniture used is mats and these types of mazes used to be incredibly popular before the introduction of Wired Furniture.

Users are more likely to gain a prize for completing Mat Mazes due to them being much more difficult than other types of mazes.

These types of mazes are rather uncommon due to a lot of planning needing to go into the creation of an Illusion Maze. These mazes are done solely with furniture, but the furniture blocks almost the entirety of a Teleporter so that users struggle getting to the next stage of the maze. Quite often, only a very minuscule piece of the Teleporter will be displayed and it will usually blend in with the other furniture in the room.

Before the :Furni command was altered, people could sometimes use the command and search for what type of Teleporter they were looking for. This also allowed used to click on the furniture item and then click "Use" to instantly help them get to the next stage. Prizes are also more likely to be given out for users completing this maze due to the sheer difficulty of the maze.

Wired Mazes are the most common type of mazes found in the hotel today. They are generally longer than a lot of other mazes due to the number of challenges that can be created via Wired Furniture. Due to their popularity, prizes aren't usually given out if a player manages to complete a Wired Maze.

Wired Mazes are also quite difficult depending upon the room builders knowledge of Wired Furniture, and quite often these mazes will be very long.

Example of challenges in a Wired Maze, include a "snake" maze, which is a series of rollers lined together. The goal is to reach the end, without falling off the rollers.