Rock, Paper, Scissors is a game on Habbo created by Volunteer of Habbo.com (International) which was chosen to be the 7th game in the Habbo Games Hub campaign. It consists of a gaming area that includes Pura Blocks and a lot of Wired furni. The aim of the game is similar to that of the real-life version, but in this attempt, the participants say the word rather than perform the hand gesture.In this game, users could win the "silver pawn" chess piece badge.

Two players enter the game area, and the Wired is set up so that if you say either rock, paper or scissors. It will whisper it, and it will count as you go - once the other player has chosen too, the Pura Blocks spell out the letter of the one you chose (R for rock, P for paper and S for scissors). The winner then stays on for another round whereby they must beat another contestant, the loser, however, will teleport out of the gaming area.

There are two lines in the game and two sets of Pura Blocks in red and blue - there are no advantages to whichever path you choose. Players line up and wait their turn, once ready the Area Gate will open and teleport them into the gaming area. Once both players are ready, the round begins. The game requires you a couple of wins and when you have accumulated the correct amount of points the player will teleport out of the game area allowing others to play. 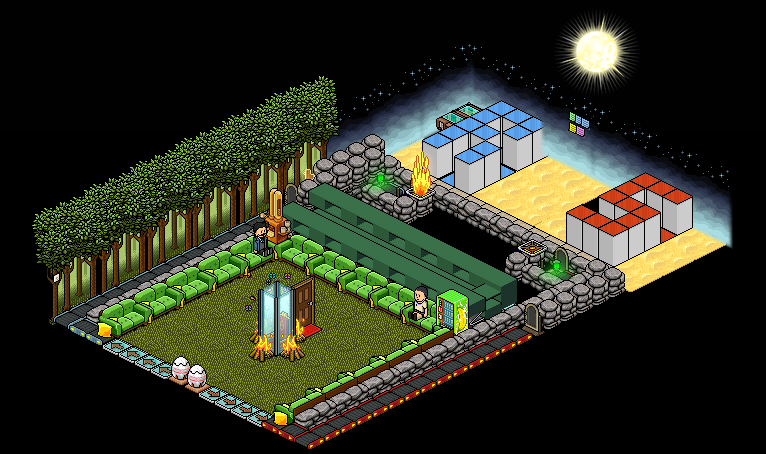