Deal or No Deal was first created on Habbo.co.uk (Habbohotel.co.uk) in 2006. It is based on the game show called Deal or No Deal. The first game was used as a profit maker which allowed people to bid furniture to play.

Example of Deal or No Deal 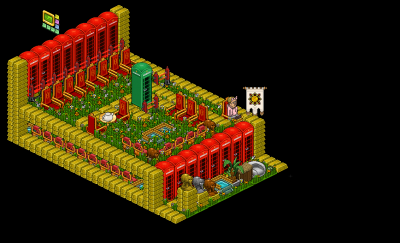 Deal or No Deal is a very simple game. It has the same rules as the game show it's taken from, but has a variety of differences to transform it from a real life game to a virtual one. Instead of opening boxes, Teleporters are randomized and link to a random amount of Credits, a rare or a norm. There are eight Teleporters instead of twenty-two boxes and every three Teleporters a player opens is classed as a round. After two rounds all boxes available apart from the final two will be opened. Every round the player will get at least one offer, possibly being: