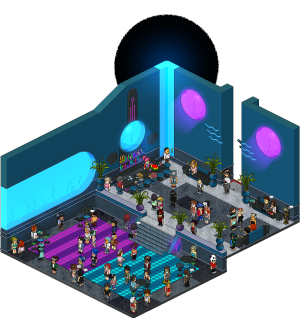 The ClubNX one of the most popular Public Spaces.

Public Rooms, also known as Official Rooms and Public Spaces, are special types of rooms available to visit on Habbo. Public Spaces were first introduced early in Habbo's history, and could be used to visit and chat with other users, and some spaces had interactive features available to use.

During the upgrade to the flash client, public rooms were converted and many rooms no longer included longer backgrounds and instead were cut to look more like user rooms. 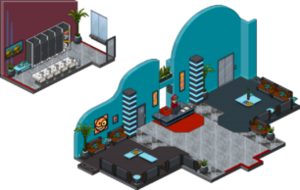 Old Public Spaces didn't have any "real" Furni in them, however there were tiles that act as Furni, such as chairs, and stairs. In the newer Public Spaces that are created on a Habbo Staff account Offical_rooms, the rooms are built with special furniture that are only available for that account. Nearly all the furniture used is titled Habbo Hotel with special backgrounds and is not available for public release.

When Habbo upgraded to their flash client, some Public Spaces were unable to be visited - and were therefore removed from the Navigator. Over the time, more and more public spaces were closed and locked, not allowing users to enter them. Many Habbos were angry at this and persistently asked Sulake Staff to re-enable them. However, very few Public Spaces were able to be visited directly by changing the forward room ID parameter in the client URL to the room ID of the Public Space, and it would let them in.

In late December 2011, few Habbos were trying out more room IDs to try and see if any public rooms were open or closed. They noticed that many more were opened since they tried at the time of the Public Spaces removal. Eventually, within a few hours, Habbo had compiled a list of room IDs available to use to visit the Public Spaces as they wished.

In February 2015, Public Spaces had been removed from hotels and replaced with Official Rooms. These are new, redesigned versions of previous Public Spaces built on the Staff account official_rooms with furniture only available for that account. The furniture is titled 'Habbo Hotel' and is not for public release. This made Official Rooms more accessible with furniture that can be interacted with such as drink machines. A homage to the Old Treat is also accessible upstairs in the new Theatre. Sometimes there is the exception that Habbo Staff will enlist their room as an official room.

In January 2016, Official Rooms were renamed to Public Rooms, how they originated.

The current Public Rooms are listed below. Some are locked and unlisted on the navigator but can be accessed by searching official_rooms in the room owner tab on the navigator.