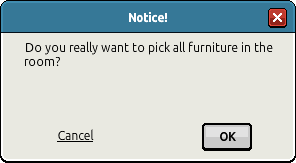 The Command :pickall is used to pick up all of the furni that you own in a room. It was first introduced back in the Summer of 2009 (during Release 36), but it was never officially announced in a Habbo news article. If the command is used in a group room, only your furniture will be "ejected/picked up." However, if you used :ejectall then all the furniture will return to the corresponding Habbos inventory.

On the 20th of October 2011, Sulake updated the "Pick Up" and ":pickall" command so that the furniture you own "flies" into your inventory when it is picked up.

There are 3 exceptions when it comes to using the :pickall command;