As with previous editions of the tournament, four teams were created and named after colours; blue, green, red and black. Each team was assigned a mascot that kept in line with the theme, these were Superman, Hulk, Spider-Man, and Batman.

At the end of the tournament, the Green Team were named as the winners, with the Blue Team following closely behind. Black Team placed third and, finally, Red Team came fourth in the tournament.

As with each Summer Spectacular, four teams were created. Each team had a mascot and two team leaders.

A new design of the Habbox Help Desk was created to keep in line with the Superheroes theme of the tournament. 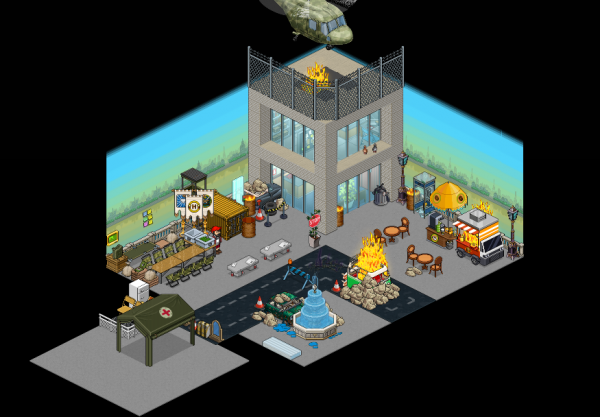 Throughout the tournament, additional tasks were released that made it possible for participants to win extra points.

The badge event that was put together by Habbox staff in August 2017 followed the theme of Superheroes, and worked as an additional promotion for the tournament.

The day the tournament launched, a competition was posted on the main site and on the forum that asked participants to post images of their avatar wearing the two badges from the event[1]. All participants who posted received an additional 50 points.

Alongside the tournament's launch, it was announced that an avatar dressed as Wonder Woman would be appearing in rooms throughout the tournament; if participants spotted the avatar, they were encouraged to take a screenshot and post it to earn 25 points [2].

Flash From The Past

Prior to the launch of the tournament, it was announced that across the ten days some "old school" events would be hosted that would give participants the chance to earn double points. These events would be classic events that did not use wired furniture, and instead were manually controlled and coordinated.

The top five scorers from each team would receive prizes in the forum of credits and Forum VIP. The prize received for top scorers varied on where their team placed at the end of the tournament, prizes given were as follows:

After the end of Summer Spectacular, the five overall top scorers from the tournament were announced and received unique rares as prizes.

The 2017 Habbox Summer Spectacular Awards took place on 10th September, the ceremony saw participants from the tournament win awards voted for by other participants[3][4].