On July 18th, the theme of the 2021 Habbox Summer Spectacular was announced[1][2] as Disney - more specifically Disney Heroes vs Villians.

Alongside this, the mascots for each team were announced. With the red teams' mascots being Captain Hook and Mr Incredible, blue team's mascots were Cinderella and Hades. Black team's mascots were Eeyore and Ursula, and finally green team's mascots were Peter Pan and Maleficent. It was also on this date that applications were opened for members of the community to apply for the role of Team Leader.

On August 2nd, members were able to apply for a team of their choosing. As well as this, the Team Leaders for each team was announced as the following[3]:

Two days before the tournament was due to start, the starting teams were announced via HabboxForum[4]. Although all users on the starting team list pre-registered for their allocated teams, additional users were permitted to join a team throughout the tournament. At the end of the ten days, blue team had a total of 31 players, green had 33 players, black team had 35 players and, finally, red team had 42 players.

The design of the Habbox Help Desk was altered to reflect the Disney theme of Summer Spectacular, and prominently featured the four team colours. The design for 2021 was based on the Disney Pixar film Up[5]. 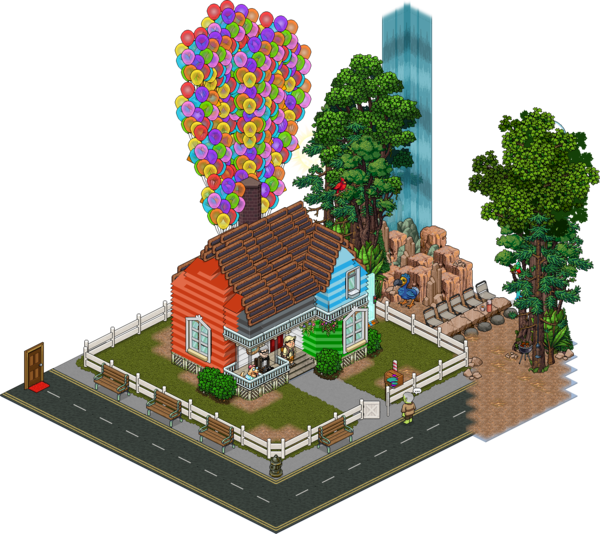 For the tournament, each department management team created a Disney-themed activity for players to participate in. Each campaign was based on a different Disney movie and were created with a set of instructions for completion. At the end of the tournament, random entrants to each department task were drawn and won either a number of points for their team, or 25 Credits. The department campaigns and their winners were as follows:

The top five scorers from each team would receive Credit prizes. The amount of credits received for top scorers varied on where their team placed at the end of the tournament, prizes given were as follows:

For each day during the tournament, the player would scored the highest amount of points would receive a prize of 100c[6].

On 5th September, approximately one week after the end of the tournament, an award ceremony was held in recognition of those who participated. The following awards were voted for by the community, with voting first being opened on 23rd August. The awards given out in 2021 were as follows[7]: