In 2020, the Habbox Summer Spectacular took place between August 7th and August 16th. The theme for this year's competition was History; which saw the four teams' mascots as Vikings, Pirates, Greeks and Cowboys.

The Blue Team were named as the winners of the tournament, while Red Team placed second, Black Team third and Green Team fourth.

On July 19th, the Team Leaders for each of the four teams were announced as the following[1]:

A week later, applications for all Summer Spectacular parcitipants to join a team were opened[2]

A new design of the Habbox Help Desk was created in line with the historical theme of Summer Spectacular, and prominently featured the four team colours. It was designed by the manager and assitant manager at the time, Stealth and Jarkie, as well as Cerys, Oivind and Ozad[3]. 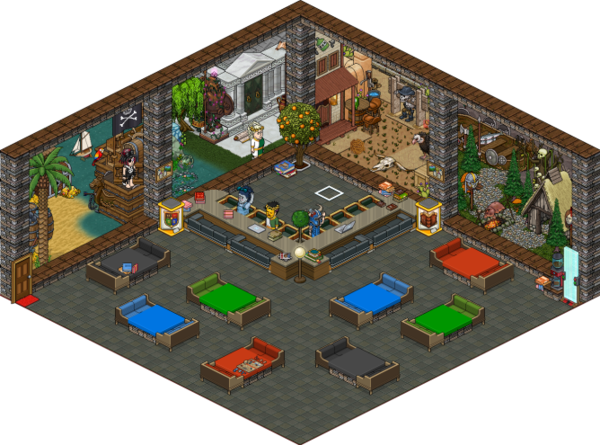 The top five scorers from each team would receive prizes in the form of credits and Forum VIP. The prize the top scorers received varied based on where their team placed at the end of the tournament, prizes given were as follows:

For each day during the tournament, the player would scored the highest amount of points would receive a prize of 100c[4].

The top 10 overall scorers from the competition were awarded a separate prize in the form of HabboxForum tokens. The top 10 scorers were as follows[5]:

On 28th August, the annual Habbox Summer Spectacular award ceremony was held in recognition of those who participated. The following awards were voted for by the community, with voting first being opened on 28th August. The awards given out in 2020 were as follows[6]: