The 2018 Habbox Summer Spectacular was announced a month before the tournament's launch, with the theme also being announced as Fantasy[1]. Each team was assigned a fantasy race: these being Mermaids, Elves, Dragons and Fairies - in keeping with the team colours.

On July 26th, the teams, team leaders and mascots were announced.[2]

Prior to the tournament beginning, a new Habbox Help Desk layout was revealed in keeping with this year's theme. The room was designed by Shonly. 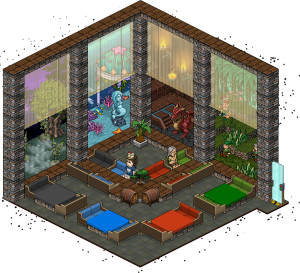 The top five scorers from each team were as follows:

Following the end of the Summer Spectacular, the top overall scorers from the tournament were announced [3]. All participants in the top 10 received a different prize.

The 2018 Habbox Summer Spectacular Awards were announced on 19th August, and later took place on 2nd September. The ceremony saw 13 prizes be awarded to participants from the years' tournament.