HabboxLive is the official radio station of the fansite Habbox. HabboxLive is a dedicated radio station for fans and players of the Habbox Community. There are a variety of DJs from around the world who play all genres of music, streaming live 24/7. DJs are supported in anything to do with their roles from Mentor DJs, Senior DJs and HabboxLive Management.

Rusted! currently manages the team with assistance from a team of Senior and Mentor DJs. 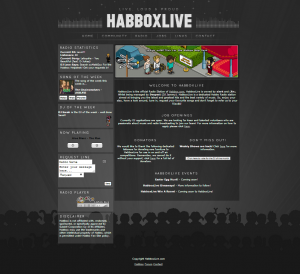 The history of the radio begins back in August 2004 when jrh2002 and Wayne_J felt Habbox would benefit from having its own radio. jrh2002 purchased HabboxRadio.com and Wayne_J who, as the technician, helped to create the radio as a secret project without the most the Habbox Staff knowing about it, including Sierk and Mizki. The idea came about because Mizki was DJing on another Habbo radio site and was a huge success. A radio for Habbox would attract lots of new people to the site as DJs and listeners. At its height, Habbox Radio managed to get over 400 listeners and regularly had over 300 listeners.

Around this time, HabboxLive also garnered the extremely prestigious award for ‘Best Habbo Radio’ in the first ever Habbo Fansite Awards. This was a monumental achievement, which also meant HabboxRadio getting an article in the weekly Habbowood Happenings.

Around the September of 2005, there was a disagreement between Habbox and Habbo, and sadly this affected quite a few of the staff at Habbox Radio due to a lot being Hobbas and Habbo staff. So jrh2002, who was caught in the middle, decided in order to keep the radio that had been worked so hard on at its current high standard it would need to be rebranded and move away from Habbox or else lose most of its top DJs. The radio was changed from Habbox Radio to Radio Habbo where most, if not all, of Habbox Radio's staff continued working.

The split of Habbox Radio from Habbox that Sierk was in a tricky situation as Habbox did not have a radio branded under its name anymore. On the 29th October 2005, HabboxLive was born thanks to a Habbo called, Kristian.K10 who later either sold or gave the site to Sierk. It was first managed by Bi!!y with the help of two assistants, namely —MAD— and Aquae who later changed her name to Acqua, both of whom later resigned to take up other positions with Habbox.

The period of 2006/07 was one of very strong growth for HabboxLive. Bi!!y remained HabboxLive Manager until the February of 2006 when he then became the Assistant Site Manager for the radio, and two new Managers were announced, Angel-Light who was previously Bi!!!y’s assistant and Barkseh. Barkseh later left HabboxLive on a sour note and his Head DJ, Adzeh took the reigns. Adzeh was seen by many as a strong manager. During this period, the radio was added to the main Habbox site and that increased listener flow.

By January 2007, HabboxLive started hitting triple listener figures. The radio was most stable during this period, with DJs staying at the department for a long time and lots of interesting shows being introduced, such as ‘The Vault’, ‘Primetime Live’ and ‘Chatterbox’. By September 2007, Adzeh felt that it was time to resign and both he and his assistant Angel-Light called it quits.

Sierk wanted somebody with management experience. jrh2002 did ask about becoming a joint manager or assistant to ,Jess, as he always believes promoting from within is the best way to keep the staff happy but it’s not the way Habbox management wanted it to be done. jrh2002 set about getting a lot more DJ’s and altering a few things to try and give the radio a much-needed boost and get it on air 24/7 as it had been a little neglected for a little while during the process of the previous management leaving. jrh2002 made ,Jess, assistant manager and it wasn’t long before he passed the responsibility of being radio manager to her.

On 10 October 2007 jrh2002 resigned from Habbox Live after a couple of months due to a difference of opinion in management and going onto a higher post within Habbox. When ,Jess, became manager she soon appointed her assistant manager, H0BJ0B. Together they saw HabboxLive hit its strongest point since it opened, with listeners often hitting 400. HabboxLive further developed with daily news updates, which continued until the DJ doing it was dismissed. Both Jess and H0BJ0B would continue developing the radio by implementing special hours such as an event called ‘Flashback’ in which every hour would be a different decade of music. This strength continued further when H0BJ0B resigned and Melsia became the assistant manager.

By 2010 HabboxLive started to dwindle slightly in terms of listeners and DJ quality. By this period, HabboxLive was starting to grow further internationally, with a build-up of DJs from various nationalities. On the 7 October 2010, ,Jess, resigned from her post as HabboxLive Manager, after nearly 3 years on the job - a monumental achievement. She was replaced by her Australian assistant Gems,x.

Gems,x focused on getting the radio back on track by improving the radio on-air time, creating more interesting shows such as the ‘Eurovision Hour’ and slowly re-building on the listeners that were lost in the management transition. She had relative success with this, however, the General Manager at the time was unhappy with HabboxLive’s progress and re-instated ,Jess, as manager on 24 January 2011.

From February 2011, DJs were split into 4 groups, with one Head DJ taking care of each group, sending feedback PMs on shows etc. ,Jess, also implemented a number of massive events such various giveaways, listener challenges, competitions, call-in shows, dedicated hours to various kinds of music etc. This proved out to be an extreme success and meant the listeners often started to hit the triple digits again by the end of February.