Sectional, also known as Triz is the current Habbox Forum Manager. He first joined Habbo in 2002 under the username '"orito"' which he still logins to every once in a while. Triz joined Habbox in 2007 however wasn't an active member until around 2011 where he applied for Habbox Help Desk Staff, a role which he kept coming back to throughout the years, however as Triz is known for his once-a-week logins to Habbo, it wasn't a role that was viable for him, as such he turned to Forum Moderating where he could focus and dedicate more of his time, but also where he felt most at home due to vBulletin Forums being one of his strong points having managed, owned and ran his own vB forum previously.

It was announced in February 2020 that Triz would step into the role of Forum Manager[1] after the resignation of Sloths. This is Triz' first management role at Habbox, having only previously held a senior role position at Habbox Help Desk[2] in 2011. 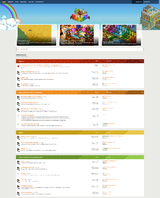 Since becoming Forum Manager, Triz has implemented a lot of changes on the Forum and except for forum skins, it was something that was neglected for around 3 years. His first major update was the addition and re-brand of the Thank/Like system,[3] which was renamed to the Reaction system where an additional 3 buttons were added to the forum "Love, Shock & Laugh" which went along with the already existing "Like" button. Hashtags were also introduced at the same time as well as updated iOS emojis and the editor box having all its buttons changed to a more sleek and professional look.

The second wave of updates came merely a few weeks later[4] which saw new Awards being introduced in line with the recently implemented Reactions system, and updated milestone awards for the forum. A TikTok BBCode was also added and a brand new feature for being a VIP where they are able to "Ignore" forums and threads of their choosing.

Triz's third[5] and fourth[6] major updates to the forum was the addition of two brand new BBCodes, which were the in-line hidden spoiler (allowing users to hide single or multiple words mid-sentence) and the rainbow text. The UserCP got given a make-over with icons being added beside each link, and default avatars being updated and the ability for users to select an avatar at registration, along with setting their Habbo name. In addition to this most of the vBulletin standard warning and error messages were given a personalised Habbox touch with them being re-written and images added.

Lots of other changes have been made however were never made public, as some changes and forum updates were for Habbox staff and therefore only valid in staff areas or visible to certain staff user groups. All of these changes/updates were mainly due to the Coronavirus outbreak which led Triz to being furloughed[7] and left at home extremely bored.