World of Zombies is one of many games which form the Habbo Games Centre. This game was the 9th addition to the Games Centre and is most similar to Hero Zero. The game takes the format of many games found on Facebook, the aim being to progress through the levels by completing a variety of tasks. Habbo itself described the game's focus as "Explore the island, construct kooky buildings, grow rare and exotic plants, hunt for treasure, fight over brains, and exchange recipes with your friends in this unique social game". The game plays on the social aspect of Habbo and really incorporates it into the game - allowing users to visit a friend's island to dig for treasure, send items required in a friend's wishlist and bury friends to earn more brains. Unlike most of the games in the Game Centre, there are not currently any achievements available for this game although there is potential for them to be added.

When the game was first added to the game centre, a room was released to promote the game in-client, it can be seen below and can still be visited on the Netherlands hotel here: http://www.habbo.nl/room/35543963. 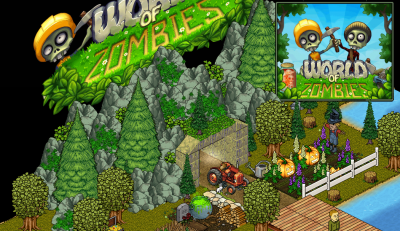 The game has many features and relies strongly upon resources which can be harvested from a user's island. These resources are primarily wood and stone which can be collected by zombies hired to work on your island. The resources collected are then used to build various buildings or to create contraptions within these buildings which in turn will complete quests or help construct another building. When a resource has been harvested as much as it can be, the resource point will disappear and be replaced with a treasure chest which usually contains coins, experience and occasionally collectable items.

Along with the resources on an island, users can also plant and harvest crops which also contribute to quest requirements and can also be sold to earn more money. A plot of land must first be planted which costs 15 game coins and a user must then plough the land ready to sow the seeds. Seeds range from Clovers and Blueberries to the Hypnosunflower and Sleepgrass. Each type of seed has a different price to plant the seed but the more expensive seeds also have a higher sale price once the plant has been harvested. Experience is also earned when planting seeds which will help a user reach the next level. When a plant has been harvested, the produce can either be sold or kept in storage for use in recipes.

Zombies are essentially workers who complete given tasks on a user's island. There are 3 different types of zombie, each of which can carry out different tasks. The Woodcutter will chop down trees, both collecting the wood resource but also clearing space on the island. Similarly, the Stoneminer collects the stone resource and also creates more space once a rock has been broken down enough. The third type of zombie are the Cooks who can prepare a range of food items ranging from Blueberry Pretzels to the more unusual Eyeball Liqueur. As a user progresses through the levels it becomes possible to hire teams of Woodcutters and Stoneminers which only take 3 minutes to complete a task compared the usual 10 minutes. Zombies require brains to function. Users have 3 brains by default with an additional 2 being earned by burying friends. There are also options to buy more brains using Zombucks, the game's cash currency.

Buildings have many different uses and range in price and the requirements to construct them. Inside buildings a user can create a variety of items but only certain items can be made in certain buildings. For example, the Crypt can produce tubes and green paint whilst the Mill is able to make wooden boards and cement.