BubbleJuice was a Habbo Fansite. However, unlike a lot of other fansites, BubbleJuice was run as more of an official partner with Habbo, working closely with Sulake to show other companies examples of how they could advertise on the Client.

BubbleJuice ran events on the International hotel using their partner Habbo Addicts. There was also a forum and a radio, although these have since been shut down.

Deegers also known as Deege and Karmix was the previous owner of Bubblejuice.org. She was responsible for wide range of duties for her official fansite back in the days, such as making sure things are running smoothly and in a successful way, and maintaining positive and constant communication between Bubblejuice and Sulake representatives, making sure to always meet their expectations of their fansite.

It was known first as a Habbo forum. Mid 2010/early 2011 it was expanded with much more information about Habbo Hotel and Bubblejuice.org, since then it was not a forum only website. They also had their own radio called “Bubblejuice FM”. Towards the end of 2012, Deegers stepped down as fansite owner of Bubble Juice, the fansites remained active until May, 2013. After that, the fansite became active again by user .:RC-Boy:.. Known as fansite owner of HabboHelpers.com. 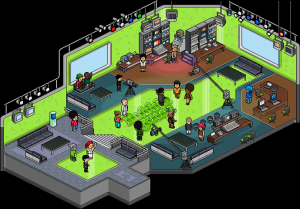 BubbleJuice had an Official Room on the Hotel (called BubbleJuice Lounge). It was based on the TV Studio and utilised a lot of the furni which was already in that room, although with many green accents added.

There was also furni released in conjunction with the site, including the Habbo Cola Machine (originally called the Bubble Cola Machine) and the Habbo Cola Poster. Both items were rebranded from previously existing furni from the Mountain Dew campaign in the early 2000s.

Several other drink-related items have referred to BubbleJuice throughout the years through various campaigns and releases.

The Executive Drinks Tray also mentions BubbleJuice, with its Furni Motto set to 'Try some of the 50 year old Bubble Juice.' (although this is no longer viewable in-game). This item is not branded or coloured in BubbleJuice colours and does not give any handitems unlike many other drink-related furni.

The HC Butler and the HC Minibar give out the handitem Bubblejuice from 1978.

The Edgy Glass Distributor from the Vaporwave Vibes campaign gives out both Bubble Juice Bottle and Sparkling Bubble Juice.

When the Habbo Palooza campaign was brought out, one of the Palooza Rares was a stand designed for the Habbo Cola machine, however, it retained its original name of Bubble Juice Stand.