Infected Laboratory was a campaign and furniture range that ran throughout October 2018, for Habboween.

The following Halloween-themed furniture was added to the catalogue during this campaign.

The following clothing items were released for this campaign, most of which were bloodstained. 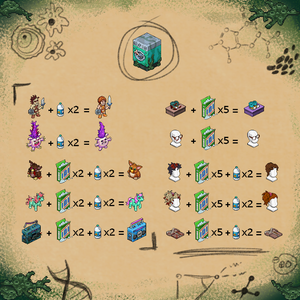 The following items could be gained by through the crafting system.

Four new rares were released throughout this campaign; two of which were a wearable items.

The Salem (also known as Toby) Limited Edition Rare was released on October 28th. All 396 units sold out in less than 10 minutes.

Three previously released Halloween-themed bundles were re-released throughout the month.

Players were asked to design a room to be used as part of a haunted house event for the Habboween campaign. Players were required to use special effects and lighting to create a frightening atmosphere in their rooms. Selected rooms would be used for a haunted house event held by Habbo Staff with Badges found in several of the rooms. The selected winners would win Blood Smear (x1), 101 Washing powder (x1), Badge (x1), three days of Habbo Club membership, and seven days of Builders Club membership. All entrants would win a previously unreleased Hippo.

An Image To Die For

Players were asked to use existing Habbo furniture and a Stack Magic Tile to create their own furniture within a 600x600 image size. Ten winners were chosen to win a badge, seven days of Builders Club subscription, and three days of Habbo Club subscription.