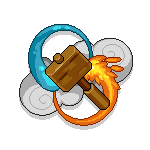 The Crafting system was the process of creating new items by using different combinations of furniture in the crafting table. The system was first released as a part of the 2015 Habboween campaign and has been a part of different campaigns since.

As described, the crafting system requires the users to present two pieces of furniture to be able to create new items. Items to be created greatly depends on what pieces of furniture were chosen to be the "ingredients". Along with this, a large number of recipes were provided, each yielding different kinds of resulting items.

Clicking the Crafting Table will trigger the crafting system. A menu will pop out, which will show you a list of ingredients, a list of your public and secret recipes, as well as the side where you can take your furniture for crafting. Ingredients are shown on the menu, through which you can see which ones are available, and which ones are greyed out, meaning they are not present in your inventory for crafting. After placing the correct furniture as ingredients, you can, therefore, start crafting the item.

The Crafting ingredients and tables are only available for purchase during the month that they are released, although they are able to be traded and sold in the marketplace. The items can also still be crafted and the achievements unlocked after the campaign has finished. In December 2019 a selection of crafting tables and ingredients were made available in a special deal and this is the only time so far that the ingredients have been made available for a second time.

During the December 2020 campaign Enchanted Winter Forest Habbos could craft for the last time due to the upcoming Habbo 2020 update. Crafting tables will not work in the Unity client.

The pre-made crafting room for the users.

The first time Crafting was introduced was during the Habbocalypse campaign in October 2015.

Along with this, each user was given a pre-made room which consists of rented furniture under the Mystics furniture line. The said room contains the Habbocalypse Crafting Altar, which is the centre of the crafting system.

In May 2020 Habbos had the opportunity to craft facemasks and different types of clothing using Bath Bombs that came in two types of Spa Sacks, a Blue Spa Sack and an Orange Spa Sack. A Fragrant bath was required to do so.

In June 2020 could craft some indian styled clothing, this hadn't been done since the 2017 campaign Victorian Christmas.

In December 2020, Habbos could craft different 'elemental guys' by cracking a Rune Rock, and using the colored Rune Rock that came out of it, with or without the Rune Stones. This was the last time Habbos could craft. Due to the upcoming Habbo 2020 update expected to launch during the Enchanted Winter Forest campaign, Habbo warned users that the crafting could only be done on the Flash version of Habbo, and crafting would not be available on the new Unity client.

In April 2021 users could craft some modern style clothing using fashion inks and fashion design textiles of which could only be obtained from various games and activities that took place within the Hotel.

On the 10th of December 2019 a Gigantic Crafting Deal was released which made some of the crafting tables and ingredients available again for a second time, giving Habbos the oppurtunity to create some rare items and boost their crafting achievements. The deal cost 149 Credits and 149 Diamonds.

Every user who purchased the bundle also received a badge. 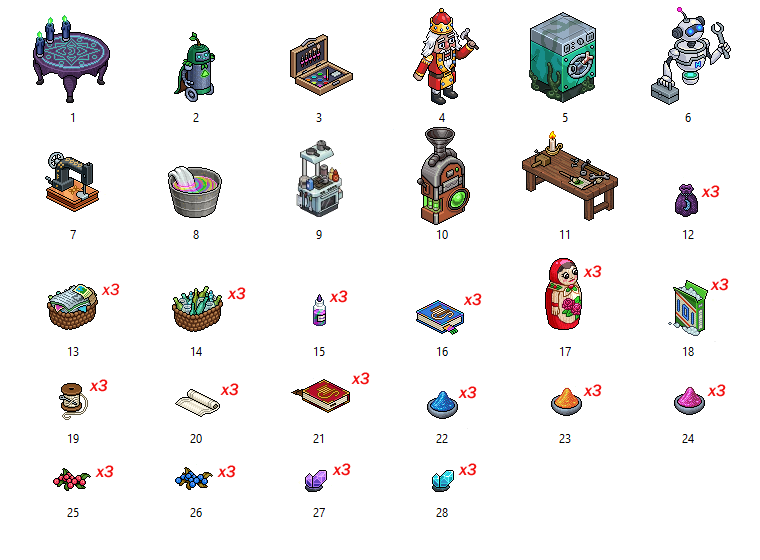 This deal came with 59 furniture including:

On the 31th of August 2021 a Humungous Crafting Deal was released which made some of the crafting tables and ingredients available again for a second or third time (since Habbo released another Crafting Deal back in 2019 as well), giving Habbos the oppurtunity to create some rare items and boost their crafting achievements. The deal cost 279 Credits and 279 Diamonds.

Every user who purchased the bundle also received a badge.

This deal came with 112 furniture including: 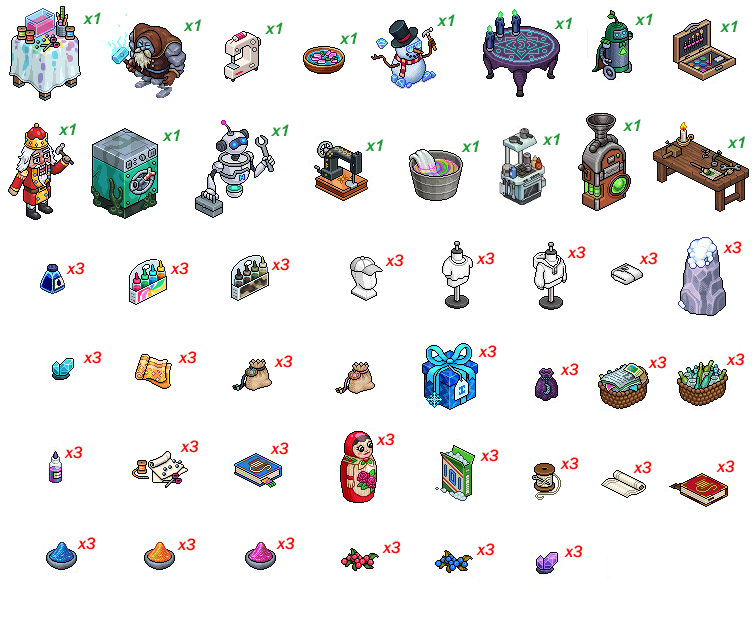