Habbo 20 was a campaign that's being held to celebrate Habbo's 20th Birthday in July and August 2020. The campaign came with a lot new furniture and room bundles. Just like the 15th birthday Habbo released a special crackable balloon which contained Rose Gold rares.

At the beginning of the campaign on July 1st, ClubNX was turned into a 20's ballroom with a design featuring the new furniture that would later be released, including adding balloons and new wall decorations and carpet. The aquariums inside the club became orange.

Seven new unique trophies could be won by entering the competitions. Four of them, the Videographer Trophy, Designer Trophy, Outfit Expert Trophy and Block Trophy became new Ultra Rares as only three people could win each one. The other three trophies, 20th Birthday Trophy, could be won several times by entering a Twitter competition. 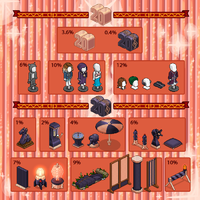 The probabilities of each balloon 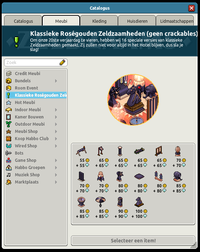 Three Offers were released. These offers contained a few 'Machines' from ranges like Diner, Infected Laboratory and New Years 2010 and an exclusive badge for each one.

This offer contained the following furniture:

Machines offer two was released on July 14 and contained the following 37 furniture:

Machines Offer Two was released on July 21 and contained the following 35 Furniture:

KickWars 2020 was a game of KickWars hosted twice daily from July 16th. Habbos had to navigate through a maze of rooms where everyone had rights and had to reach the end area without being kicked. There were three hidden badges in the rooms and a badge for reaching the end. Everyone who got to the end would receive a point and the top 6 players received a Rhodochrosite Seal and their choice of either the Gothic Dessert Cafe Bundle or Chill Modern Bundle.

Bonnie and Piccolo are back in town ready to help out Frank with all the arrangements for Habbo's 20th birthday. Before they head off to meet Frank they need your help finding their luggage.

Bonnie and Piccolo have finally made it to the hotel, but now they'll need to walk past all the obstacles that are in front of them.

Frank has lost his keys and is having a hard time finding them. Help him get his keys back so he can continue getting things ready.

Frank's room has been completely trashed... Before you set off trying to find who could've done something like this, you need to help Frank save the furnis that were left behind.

Frank and his friends are busy planning the anniversary when a group of strangers sneak into the coffee shop and steal the decorations they bought. Catch the red hoodie stranger before he manages to escape.

You've sneaked inside Maude's office and now you need to see what she's been up to by checking the last message on her computer. Maude has hidden her password around the room, you'll need to find it before you reach her desk.

You've set off on a mission to find the 30 day ban bomb that's been hidden somewhere in the hotel. It won't be an easy tak but somebody's gotta do it.

You've finally found the hidden ban bomb. Now you need to be quick and defuse the bomb before it goes off.

For seven days starting from July 17th, Habbo ran a Twitter competition where Habbos would try to get a verified Twitter account with over 25,000 followers to tweet @Habbo and their own Twitter handle. Habbos would receive a 20th Birthday Trophy depending on how many followers the verified account had, 25,000+ would receive a bronze trophy, 50,000+ a silver trophy and 100,000+ a gold trophy.

The runners-up in the top five were U2 and Pulx.

Turning 20 is a Piece of Cake!

The winners were Michaels, Oivind, and @:Brody:@.

The winners were U2, purple-blep, and Doodles.

The other nine runners-up were: