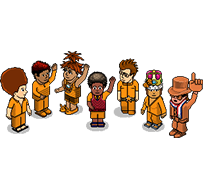 The ING Trophy is a furni in Habbo.nl and given out in 2008 during the European Championships. The trophy could be won in two ways: via a form in the Stadium and the ING Supporters battle

Especially for the EK 2008, The Stadium was turned into the ING EK Stadium. Habbo's who visited the room could win one of the 10.000 ING Trophies by going into the stadium and fill out a competition form. the first 10.000 habbos who submitted the form with the correct answers won a ING Trophy.

The ING Supporters Battle was the overall name for 3 competitions. Habbos had to be in a group in order to win. The 4 groups had to compete against each other, everytime they won a competition they received points.

First Competition: Come up with a Yell

The last competition consisted of 2 categories.

The supporters group had to build and organize something in their group room The Group room that staff members Nimiq and Crowley liked the most got 4 points. the second room got 3 points and so on..

Not only had the group build a group room, also the individuals in the group had to build a themed room. The staff choose the a room per group that suits the group room the best. The owners of the winning rooms won a ING Trophy. These were given out in the ING EK Stadium.

The final winners of the ING Supporters Battle were the Habboranjes