Coral Kingdom is the campaign that ran on Habbo throughout June 2018. This month saw the release of the new Coral Kingdom furniture line, along with four new rares, a Limited Edition rare, clothing and crackable items. The furniture line was introduced to the catalogue on a temporary basis, whereas the clothing items were set to be permanently added to the catalogue [1].

During the campaign, Bensalem furniture line was re-released into the catalogue.

Along with this campaign came an entire new line of furniture that all followed the underwater theme.

The Summer's Deal offer was available for three days at the start of June and gave players the first opportunity to buy the new Coral Kingdom furniture. It included an exclusive pair of teleports and a badge.

According to Habbowidgets, 396 people have this badge.

New clothing was added to the Catalogue during the campaign, including the first ever long hair piece. Each item was available for purchase for 5 Credits each. 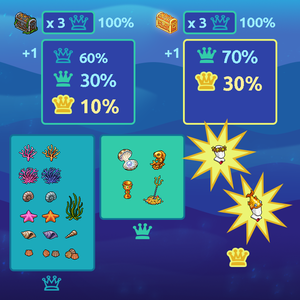 A breakdown of the rarity of the Coral Kingdom Chests

Two different types of chests were released for 24 hour periods which included both rare and common Coral Kingdom furniture.

Each chest included three of the most common items, shown below.

There were also differing probabilities in players receiving the following rare items.

Four new rare items were released during this campaign, two of these being wearing items.

During the campaign four new Room Bundles were released that consisted of Coral Kingdom furniture.

3x3 Under The Sea

The runners up were:

and the 10 second runners up were: