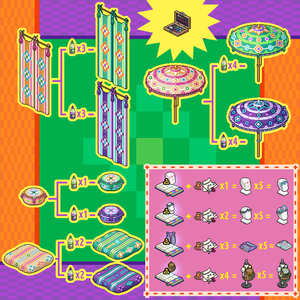 Eight items of clothing were able to be crafted using an Artisan Sewing Box. Ingredients needed were a Book of Patterns (which would give the user one of four patterns) and Artisan Sewing Material. Using these ingredients would create 4 of the items, and they could each be upgraded further to make a even rarer version.

There was also dye available to create different colours of four of the Catalogue Furniture items, the Orange Festival Curtains and Pink Festival Parasol and both Cushions could be dyed green or purple.

Six different types of Festival Skull Mask rares were released, they all came with their own badge and there was also a badge for collecting all six.

The Official Fansites all hosted a festival Live Event and Habbos received a badge for attending one of the sessions. If they also stayed until the end of the hour, they could also receive an Orange Hippo.