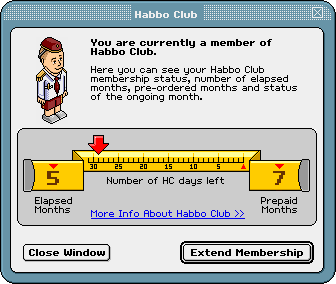 Habbo Club or HC for short is an addition for regular Habbo users to buy to upgrade their account and gain access to exclusive features. Habbo Club at the time cost 25 credits, and previously only 15 credits during the revival of HC for one months subscription. There are occasionally deals which offer discounted prices for Habbo Club subscription during events and seasonal occasions such as Christmas.

Habbo Club was discontinued on the 30th of November 2011 so that Habbo could focus sales on Habbo VIP. On the 16th January 2013 under new staff at Sulake, Habbo Club has returned again, taking over from Habbo VIP with the promise of new gifts, badges and hairstyles.

In March 2016 the price of Habbo Club increased to 50 credits and 50 diamonds for 1 month and with the increase in price came more benefits for HC members such as no ads and the new HC payday which will award you with credits once a month depending on your HC streak.

Habbo Club was first established in December 17th 2002 at a price of 25 credits, and underwent numerous major changes over the years. The introduction of Gold HC came not long after it was first introduced, in order to add an incentive to those who finished their first year of Habbo Club. Gold HC was issued to a member after 12 months of regular HC membership (the badge received at the beginning of the thirteenth month), and it consisted of a golden variation of the HC badge which had animated sparkles and replaced the users old HC Badge.

The biggest change to the Habbo Club system came in Version 12, which included a whole new series of Habbo Club gifts, increasing the previous rotation from 12 months to 23 months. Upon the addition of these new gifts, the valuation of Rares went haywire as 12 rares were released simultaneously. For example, the Habbo Butler was valued at several thrones in the first few days. Whilst the prices of these Rares have since dropped, they have not lost their charm.

Prices for Habbo Club membership are: 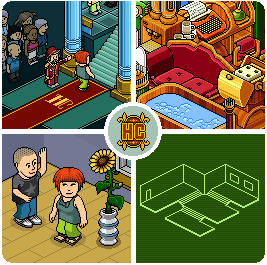 In addition to the furniture listed below, other features were available for Habbo Club members. These features include:

Furniture is available as a reward for being part of the Habbo club. Below is a list of the furniture that was available and their current price and month available. Month 12 would reward the user with a gold Habbo Club badge and a Mochamaster, repeating the gifts following continuously.

These Habbo Club gifts were added in January 2007 to convey a two year plan of Habbo Club. This enticed users to stay on for longer to reap the rewards of being a member for 2 years. The table shows the months that these gifts were implemented into within the previous range.

In this revision, the HC Plasto Set was removed and the Mega TV Set starting at Month 2

During the era of HC/VIP, this new aesthetic of furniture was released in the Habbo Club Gift Shop. This was to entice users away from the classic look of Habbo Club Gifts. This caused a divide in opinion and many users were unhappy with how Habbo Club had changed and it was later reverted in the 4th generation of gifts, which saw the re-introduction of the original style of Habbo Club.

* This line of Club Shop furniture is discontinued

Below you can see all five pieces of furniture that were released into the Habbo Club Gift section early 2013. These items were implemented with other previous gifts.

Below you can see all eleven pieces of furniture that were released into the Club Shop December 2013. These are a re-coloured version of the Executive range.

This was a re-coloured version of the Alhambra furniture line for the Habbo Club gifting system. It featured 10 different furni released in December 2014.

Below you can see the 12 furniture that were released as club gifts in 2016. This was the last year (until the Habbo 2020 gifts in 2021) you could get a furni that were specific to the months you were a club member, just like the years before: if you were a member for 12 months and over, you could choose any of them.

For the first time ever there was not a specific gift for every month. Instead users would be able to choose any of the emoji gifts per month.

This was a re-coloured version of the Bling furniture line for the Habbo Club gifting system. It featured 12 different furni and was released December 27, 2017.

The 10th Generation of gifts featured 12 statues of the zodiac signs. It was released in December 2018.

The 11th Generation of gifts featured 12 floating masks. Masks were released on 27 December 2019.

The 12th Generation launched at the same time as the Habbo 2020 Unity update. It was assumed at first that these would mark a return to the specific monthly gifts (ie: what you receive would depend on the length of your membership), however all 12 are visible and selectable.

The HC Payday dashboard in the HC Center, with bonuses breakdown

HC Payday is a subscription rewards system for Habbo Club members that was originally announced in March 2016 alongside other updates (and a price increase to 50 credits and diamonds[1]) and released in June 2016.

In order to qualify for HC Payday, a member must satisfy certain levels of subscription streak, after which they unlock the next level of reward. These range from 5 credits for 7 days to 30 credits for 365 days, where the reward caps out. This must be an active, unbroken membership, so if a Habbo loses their HC for even a day, the next Payday reward will reset to 5 credits at the next payday.

All HC members receive a bonus on the same day of the month (the 15th), mimicking a real life equivalent of 'pay day' for Habbos. The Habbo is notified of their HC Payday bonus receipt when logging in on the 15th of every month with an in-client pop-up when they log in or automatically on the screen if they're already logged in when Payday is triggered. The rewards are as follows:

A tweet from Habbo on 18/05/20 reporting on the month's figures for HC Payday.

On top of their streak reward, Habbo Club members also receive a bonus of 10% back from their catalogue purchases. This means that for example, every 100 credits spent on in-game items from the Habbo Catalogue a Habbo would receive 10 credits back on their HC Payday. This is potentially lucrative, given that many Limited Edition Rares are expensive items, often costing hundreds of credits. For example, purchasing the Fortune Duck LTD would have cost 250c, returning 25c at the next HC Payday.

The HC Payday feature involves a lot of credits, but also a lot of data. Every month on Twitter, Habbo announces how many credits were given out on the latest HC Payday, as well as what the record for the highest payback was for any one Habbo and how many Habbos were awarded over 100c. Since 2016, Habbo have announced the Payday stats on their official Twitter[2], which can be used to see an indication of the long-term spending habits of Habbos, summarised in the table below:

The graphs below based on the data above show clearly how HC Payday payments have fluctuated from 2016-2020. The spike of veteran and older players coming back to Habbo during the Coronavirus pandemic of 2020 can clearly be seen with a huge spike in payments made - because of the 10% return on catalogue purchases made while a Habbo Club member, we can estimate a rough guide of how much players with subscriptions were spending in each month. Due to the fact that Payday is only applicable to Habbo Club members, a sharp rise in the figures also allows us to assume a much larger number of active players with the subscription.

Number of Credits Given Globally

Highest Amount of Credits Paid to a Single Habbo

Number of Habbos Receiving over 100c