March 2020 was a campaign running throughout the month March and mainly focused on Art-styled rooms and furniture[1]. It began with the release of the Art Studio Bundle which came with a new furniture range exclusive to the bundle, Art Studio.

From March 20th to April 2nd a Gift Calendar was available on Hotel View, where players could claim a free gift everyday.

The crackable furniture item the Forgotten Chest was released into the catalogue for several 24-hour windows throughout the month. The chest contained six new pieces of furniture and a wearable backpack, however there was also a small chance players could receive some gold versions of the items.

Only one rare item was released during this campaign.

The following bundles were newly released during this campaign.

The following bundles were re-released throughout the month.

2 Wall offers were available for purchase.

Wall offer 1 cost 135 Credits and 135 Diamonds and contained 46 Wall items. It was released on Friday 13th.

Each user who purchased the Wall Offer 1 also received a badge.

Wall Offer 2 was released on Saturday 22nd and costs 135 Credits and 135 Diamonds. 40 Wall items were included.

Each user who purchased the Wall Offer 2 also received a badge.

The Gift Calendar which is typically available during Summer and Christmas campaigns and was available from March 20th to April 2nd for Habbos to log in and receive a free piece of Clothing, Credits, Duckets, or free days of Habbo Club or Builders Club. The clothing items available included the following. 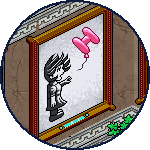 You've been asked to be part of the museum's staff team and look after the greatest art collection of all times. Will you be up for the challenge?

Take the teleport to find out, or type: game

What are the odds of someone breaking into the museum your first day on the job? Luck doesn't seem to be on your side but that won't stop you from catching the robber and saving the day.

It's time to put your photographic skills to the test and snap some pictures of the museum's latest acquisitions.

At the beginning of the month Habbo launched a new competition to help celebrate International Women's Day, in which players were encourage to dress their avatars up as an inspirational female celebrity. The top five winners of the competition were awarded the Art Studio Bundle, while all entrants received an exclusive badge [2].

The five winners of the competition were[3]: