The Golden Plasma Gate, also known as the 'Gold Laser Gate' and the 'Yellow Laser Gate' is a rare that was uploaded with various other V7 Rares. It is a fairly uncommon Rare, and is the 3rd most valuable Laser Gate on Habbo.com (International) due to it only being handed out as rewards on Habbo.com.sg, which was the smallest English-speaking community before the Merge and Habbo.com before the Merge and during 'Scratch card/Credit Action' campaigns - it was also handed out on Habbo.co.uk for various competitions, such as 'Funky Friday'. It is one of only four Laser Gates that have been solely released via rewards with the others being the Pink Laser Portal, Turquoise Laser Portal and the Jade Laser Portal.

The Golden Plasma Gate has been spotted on 8 hotels in total, but only released on 7. Here is a complete list of all sightings/releases: 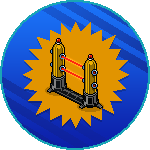 Everyone who bought the Golden Plasma Gate as Classical Rare in the Catalogue after 2010 also received a badge.