The Blue Spaceship Door is a Rare that was uploaded amongst various other V7 Rares. Globally, it is one of the most uncommon Rares and can only be found on 2 hotels - Habbo.se and Habbo.com. It entered existence on Habbo.com due to it being handed out as a competition prize (and later a "Funky Friday" prize) on Habbo.co.uk, but also due to a special event that occurred on Habbo USA. On Habbo USA, staff handed out blue gifts to members who logged in on certain dates - the Blue Spaceship Door was the fifth item in the lineup (others included Portaloos and Minibars). Due to so many being handed out, the value dropped dramatically and had a knock-on effect after the Merge. This Spaceship Door is not to be confused with the Sky Spaceship Door which is a lighter colour and worth a lot more.

The Blue Spaceship Door has been spotted on 3 hotels and released on all of them. Here is a complete list of releases: 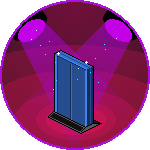