The Purple Marquee is a Rare that was uploaded amongst various other V7 Rares. It has only been released onto 3 hotels and it is currently available on Habbo.com. It entered existence on Habbo.com due to it being sold in the catalogue on Habbo Australia - the moderately small size of the Australian community combined with the mass deletion of accounts during the English-speaking hotel merge meant a lot of the Purple Marquees were deleted, thus making them a fairly uncommon Rare. The other 2 hotels which witnessed this release were Habbo.nl and Habbo.fi.

The Purple Marquee has been spotted on 3 hotels in total and released on all of them. Here is a complete list of the releases: 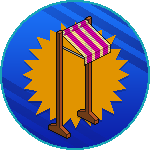 Everyone who bought the Purple Marque as Classical Rare after 2010 also received a badge.