The Superlove Pink Fan (also known as the "Pink Fan") is a Rare that was uploaded amongst various other V7 Rares. It was released onto all hotels (except Habbo.com.sg and Habbo.com) on the 14th of February 2006 in celebration of Valentine's Day, thus making it the third Fan to be sold in the catalogue (after the Red Powered Fan and Purple Powered Fan. No-one is quite sure as to why it is named the "Superlove Pink Fan" and not just "____ Powered Fan" which is the format for all other Fans. The Superlove Pink Fan is also not to be confused with the Fucsia Powered Fan which is a slightly darker colour and is worth marginally less.

The Superlove Pink Fan has been spotted on 15 hotels, but only released on 14 of them. Here is a complete list of all sightings/releases:

Every user who purchased the powered fan on habbo.nl also received a badge.

Superlove Angelz was a story on the Habbo.com Community page with the release of the Superlove Pink Fan You can read the whole story here:

We're under attack. All of our Staff rooms and VIP areas have been taken over by an unknown force while we were releasing all the Love Furniture. There is almost nowhere left safe to go, we're retreating to my VIP Lounge hoping that the spaceship door their will be strong enough to hold them off.

I tried to catch a glimpse of our attackers, but all I saw was a bunch of girls in pink armed with some strange weapons. Girls in pink?? That doesn't make any sense at all...

They are following our Habbo characters no matter where we go, and they can get past all of our defenses with nothing but a smile. They don't actually say anything, they just smile and bring out some large pink guns.

We lost a few people already during our escape from the last few rooms. ScribeX was taken very early, I hope she's ok but I'm not sure. On our last retreat, Jyve covered our escape just as the pink girls somehow got into his

locked room. He threw himself in front of the door and activated some laser gates for a stand off. The last i saw of him he was getting shot in the fro, blocking off our escape route. He was a valiant companion and we will always remember his sacrifice... Right now, the only people left are Caedma, and iomegadrive, and me.

Don't worry Habbos, we have a plan for our last defense. I will not be giving up the hotel that easily! There's no way we will let them hack our hotel and take over.

Hey everyone, guess what?

Our whole whole defensive plan was a failure. The girls wearing pink tore through my spaceship door like a hot knife through butter, and then cornered us in the VIP Lounge. Then - always smiling - they zapped us with their weird looking rayguns. Caedma managed to barely get away in an Imperial Teleporter I had dropped as a backup plan.

iomegadrive and I were engulfed in pink energy and some strangely shaped bubbles, and I thought that would be the end of us. But instead, we saw the light afterwards!

The girls in pink are not malicious invaders at all, they aren't dangerous assassins sent to destroy Habbo Hotel USA!

They are...the SUPERLOVE ANGELZ, messengers of Cupid, and Harbringers of Superlove in Habbo!

Armed with their Superlove Rayguns, they are here to zap us all into romance and bliss! Also, they're here to help us create and celebrate the coolest virtual Valentine ever. A real Habbo Valentine, where it's all about LOVE.

I'm going to go visit some of the other hotels and see if they had the same experience with these girls, hopefully they did...

Before that, everyone should celebrate this event with all the romantic Love Furniture you can find. It's a great set of furniture and I'm also releasing the Giant Heart along with the rest of the Love furniture in the catalog.

I haven't been around in the Hotel very much in the past few days, but I can explain!

After iomegadrive and I were zapped by the rayguns, we both saw what the Superlove Angelz were all about: love, romance, and all that stuff! So I went to visit the other hotels to see if the girls in pink visited and brought love and happiness to them, too. While I was roaming around the corridors of the Singapore Hotel, I happened to see a stunning habbo girl there with bright red hair. As soon as I saw her, my eyes went wide, and I was starstruck! It was really tough, but I asked around until I finally found out her name, Saffron. The funny thing is, she's the Hotel Manager there, how weird is that?

We met and talked for what seemed like forever about everything from music to the coolest rares in the Hotel. She seemed sad she had to go visit something called HabboSpaceOne, but I understood and we parted ways.

After getting back to Habbo Hotel US, I wrote up a letter to show my true feelings for Saffron:

Ever since I laid my Habbo eyes on your pixels, I can't seem to forget you. Has anyone ever told you that you have a beautiful smile? Maybe some time we could go out for a Habburger or two. Whenever the...

That's probably enough, you get the picture. I wonder how she will reply?

I can't believe it, she responded to my letter! What do you think she said? Here we go...:

Dear Kedo, I haven't been able to sleep since I received your letter late last night. Your smile is the sweetest I have ever seen and you have such strong shoulders. I don't think I have ever met a Habbo who has made me feel this way. I'd love to go out for a couple of Habburgers - I usually eat two. Love, Saffron

Whoa! She's totally into me too. This is awesome! My gym workouts have totally paid off!

How about this everyone? I'm going to put out some Superlove Pink Fans because I'm so happy she said yes! Have fun with them, send them to those special people in your life. :)

'Saffron, Ever since I laid my Habbo eyes on your pixels, I can't seem to forget you. Has anyone ever told you that you have a beautiful smile? Maybe some time we could go out for a Habburger or two. When the sun came up this morning, my first thoughts were about you! You are the Hologirl of my heart. Plz respond, Kedo''

-Kedo, Hotel Manager and Supreme Something of Habbo Hotel USA 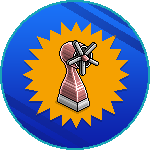