The Red Amber Lamp is a Classical Rare. It was first released into Hotels in August 2003, and from then on it has been re-released a numerous amount of times. It has also been given away in various competitions and credit promotions and was spotted in Habbo staff rooms.

The Red Amber Lamp has two others in its set, which includes the Yellow Amber Lamp and the Royal Egyptian Lamp, also known as the Blue Amber Lamp.

It was given as a prize on Habbo.fr, Habbo.nl, and Habbo.no (during the Credit Action campaign), however, the dates for these are unknown.

The Red Amber Lamp has been spotted in the following hotels in staff rooms. However, there is no record of the item being released. 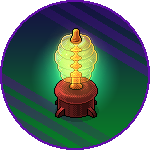 Every user who purchased the Red Amberlamp in 2019 also received a badge.