Habbo.no (formerly known as habbohotel.no) was the Norwegian version of Habbo Hotel. It first opened in June 2004 and was one of the oldest hotels until it closed down 29th of April 2015.. The hotel was the most active hotel in Scandinavia from about 2006 - 2013 and only a small handful of Staff ever worked solely on this site. The hotel was only accessible between 6 am - 2 am, The reason for this was that a lot of parents complained to Sulake that their kids wouldn't sleep and ended up playing all night and struggled to get to school in time in the morning.

Habbo.no was never a pilot hotel for furniture items and Client Updates. The only exception to this was that Habbo.no was the first hotel to get V7. There was also two examples of a furniture item being sighted on this hotel before anywhere else which was the Yellow Rose (Valentines 2007) and the Pink Marquee.

In total, 95 badges were created solely for use on Habbo Norway.

After being a huge Norwegian community for 11 years, Habbo.no announced in January 2015 that the hotel would close down on the 29th of April 2015. All the members were promised six months of Habbo Club and Builders Club if they choose to continue on a different hotel. A badge was also given out to Norwegian members on Habbo.com in May 2015. Shimmer and Shine eventually took over the hotel, and you won't be redirected to habbo.com if you are lucky.

There has been a total of 37 Staff members and 43 Moderators working for Habbo.no over the years. Here is a complete list of them: 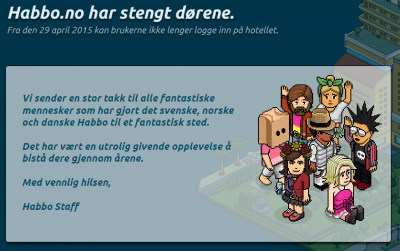 The Habbo.no site after its closure