The Bronze Elephant has been around since September 2003 when it appeared in the United Kingdom Hotel's catalogue. Since then, it has been given away for various competitions and was released into the catalogue in many of the Hotels. Currently, the only Hotels not to have this Super Rare are Italy and Brazil. The Bronze Elephant was never spotted in a Habbo staff room, thus aren't that hard to come by. It was the 12th rare to appear in Habbo.co.uk. Its motto is "imported Handicrafts".

Not much variety in the way the Super Rare was released, showing that they were all released close together with the Silver Elephant and Golden Elephant shows that they were more of a trio item rather than a singular one!

The Bronze Elephant never shied away from the Catalogue and was almost always present in at least 1 hotel over the years. The releases over the years are shown below:

In November 2013, a competition was released that featured players competing to beat Habbo's video Vampire Hospital and all those with a higher rating won a trophy.

However, one video went above and beyond and managed to get 38,000 views over one weekend which sealed them the grand prize. All participants of the specific video called Beyond The Box won the Gold TV Camera Badge and a Bronze Elephant. 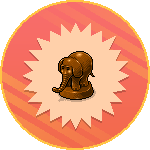 Every user who purchased the Bronze Elephant as Classical Rare from the catalogue after 2010 also received a badge.