After Collectibles failed to gain interest of users a new type of rare, referred to as New Rares, were introduced in 2010 and have continued to this day. These rares are released for about 24 hours at a time and usually tie-in to a monthly campaign, returning to the original style of one-off, unique rares in a similar manner to the Classical Rares, rather than a set like the Collectibles. New Rares come with a unique badge and - with a couple of exceptions - they are available for 25 Credits and 25 Diamonds.

Another form of New Rares are Classical rares (Not to be confused with the Classic Rares), these are old rares which were released in some hotels first, but later released into the catalogue for 25 Credits and 25 Diamonds with a badge. A good example of a Classical rare is the Pink Laser Portal which was unreleased for a long time and had an unknown origin, but was later released in January 2020 in the catalogue of Habbo France, Habbo Spain, Habbo Brazil, Habbo Turkey and Habbo Finland. However it is still unknown how it was released in Habbo United States.

Habbo-Lympix was released in August 2012 and included two new rares.

The Haunted Castle rares were released in October 2012 and originally contained two items - a Cannon and a Magic Mirror. The next two items, which replaced the Cannon and Mirror, were added to the catalogue on the 26th October 2012.

Steampunk was released in March 2013 and with came three rares. The Furni had to be purchased with both Credits and Duckets to add to the rarity of the items.

Banzai Rares were a small set of Rares released in the Catalogue during April 2013 as part of a small event centred around the Habbo game "Battle Banzai". Codes were first discovered hinting of these rares on the 17th April 2013, alas it wasn't known what the complete set would look like until a few days later when a Banzai-themed room building competition was released. Disappointingly for some, all of the Banzai Rares turned out to be recolours of normal Banzai furniture. All of the rares were released at a price of 25C and they have all subsequently decreased in value. 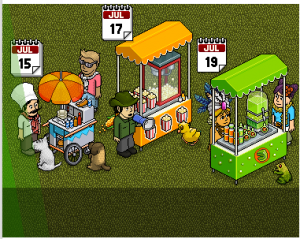 Palooza Rares were items of furni released during the Habbo Palooza campaign which ran throughout the summer months, the category included 3 similar items in forms of stands for festivals. They were released for 8 hours each time and they became available on the 15th, 17th and 19th July 2013. They were all sold for 25 Credits each time.

Pirate Rares was a Catalogue line specifically made for the for the Pirate campaign during August 2013 and it was home to the 3 rares released by Habbo to expand the new range. Likewise to most other Catalogue rares, they were released with a price mark of 25 Credits each and were available in unlimited quantities.

The items were released over a 5 day period and brought a unique-style to Habbo with the release of creatives pieces. Originally, players thought that the Kraken Habbo released would resemble Iku-Turso that was already a Collectible from The Lost World Collectibles range that were released years previous. Unlike some 25 Credit rares, the Pirate Rares have done well in terms of value mainly sustaining and exceeding their release price apart from the Kraken.

Back to School Rares

Back to School Rares

The Habbo 15 Rare Prize Balloon was released during the Habbo 15 campaign. It included one of 15 maroon re-colours of some of the original Classic, V7 and V11 Rares

Habbo in the House

Habbo in the House ran throughout May 2018 and included one new rare: