Bobba (also known as The Bobba Filter) is part of the moderation system and is the phrase that censored word or sentences with inappropriate phrasing, email addresses or long strings of numbers in it will display as.

On February the 27th 2008, Habbo added the option for players over 13 to disable the filter and be exposed to censored content. Turning off the filter did not completely unmask all censored text however; email addresses and 6 or more numbers in one bubble remained censored to protect personal contact details and card numbers from being given out.

In December 2010 Habbo released an official statement in which they announced the removal of the word "Bobba" as a filter, stating:

At the time, the filter was optional. The decision to change how filtered words displayed in chat was reverted in September 2012 and the Bobba filter was reintroduced into hotels - and made mandatory - following the events of The Great Mute.

The Bobba Skull is a popular image inside Habbo, having attained a cult status not only for its "bad boy" theme but also in the way Sulake themselves have marketed it as a tongue-in-cheek nod to the need for chat filtering.

The skull is feature on a lot of furniture and even in an emoji which can be displayed above your avatar's head.

The alt code Alt + 0170 or Alt + 422 will create a Bobba Skull in chat, in room names, in your motto, and on writeable furni such as sticky notes and gifts.

Habbo's iconic Bobba Skull even made it into real life with the short release of certain physical items, notably as a plush pillow and as a reversible doormat

Some long sentences with normal words in them can be Bobba'ed despite the intention being pure. This is typically because of the filter identifying parts of the phrasing as problematic, or words ends and beginnings forming a filtered word ie: if you said we watch opera and the word chop was filtered, it would recognise the ch- and -op and Bobba the phrase even though the user hasn't actually intended to say the word in question.

Update to the Bobba filter 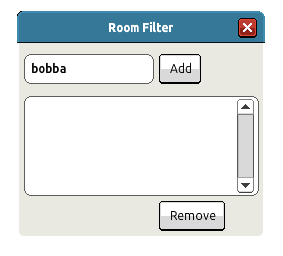 On 19th March 2014, Habbo added a feature that allowed users to add words to a custom 'Bobba' list in their own rooms. As you can see in the image, you simply entered the word and clicked 'Add'. The new feature meant that room spammers could be made less of a problem as you could add the word they are spamming onto the filter list, and event hosts can be freed from being accused of scamming by having such phrases added to the room filter.

The feature can be accessed from underneath the 'Room Settings' button. The filter is only available in your own room; you can't put a filter for other rooms you visit, no matter your specific rights in the room.

As a more drastic method of in-room moderation with a custom word filter, Wired can be used to add such words to a User Says Keyword wired stacked onto a Kick User wired. This will automatically kick the person who says the specific word, unless they are a group admin in the room.